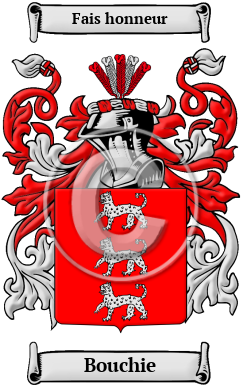 The name Bouchie was formed many centuries ago in France during the Dark Ages. It was a Norman name typically given to a the Norman given name Bucchard.

Early Origins of the Bouchie family

The surname Bouchie was first found in Normandy (French: Normandie), the former Duchy of Normandy, where the family held a family seat since ancient times.

During the Middle Ages the diverse branches of the family distinguished themselves through their remarkable accomplishments and received grants of lands, titles and letters patent confirming their nobility and that of future generations. Many members appeared in the records of 1209. In recognition of his dedicated and valuable services in his community in which he lived, Pierre Bouchard was granted the title of Lord of Cornefou in 1301.

Many other members were actively involved in the social and public affairs of their region and served their country and fellowman in leading positions: as sénéchal of Angoumois and Bishop of Périgueux in the 1500's and as a Governor of Périgord in the 16th century. And because of their fame several French provinces are proud to have been the ancestral seat for such a family.

Claude Bouchard, born in 1626, son of Claude and Marie (née Fremon), was a doctor that travelled from Picardie, France to Quebec in the 17th century. He married Marguerite Benard on 20th November 1651 and together they had two sons, Jean and Paul-Claude. [1]

Early History of the Bouchie family

This web page shows only a small excerpt of our Bouchie research. Another 92 words (7 lines of text) covering the years 1622, 1676 and 1653 are included under the topic Early Bouchie History in all our PDF Extended History products and printed products wherever possible.

Another 38 words (3 lines of text) are included under the topic Early Bouchie Notables in all our PDF Extended History products and printed products wherever possible.

Bouchie migration to the United States +

French settlers came early to North American, following in the wake of the explorers, and creating New France. Quebec City, founded in 1608 by Samuel de Champlain is said to have been the first American site founded as a permanent settlement, rather than as just a commercial outpost. But emigration was slow, in 1643, 109 years after the first landings by Cartier, there were only about 300 French people in Quebec, and by 1663, when the region was officially made The Royal Colony of New France, by Louis XIV, there still only around 500 settlers. Over 2,000 would arrive during the next decade. Early marriage was desperately encouraged amongst the immigrants. Youths of 18 took fourteen-year-old girls for their wives. The fur trade was developed and attracted immigrants, both noble and commoner from France. By 1675, there were around 7000 French in the colony, and by that same year the Acadian presence in Nova Scotia, New Brunswick and Prince Edward Island had reached 500. In 1755, 10,000 French Acadians refused to take an oath of allegiance to England and were deported to Louisiana. Despite the loss of the Colony to England, the French people flourished in Lower Canada. Among settlers to North America of the Bouchie surname were

Bouchie Settlers in United States in the 20th Century