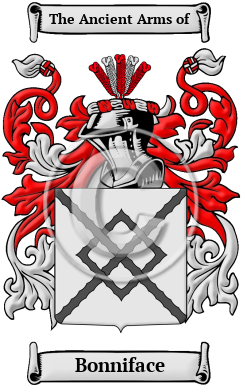 The ancient Anglo-Saxon culture of England produced the name of Bonniface. It was given to a lucky person. The surname Bonniface is derived from the Latin word bonifatius, which comes from the word bonum, which means good, and the word fatum, which means fate. Contrary to popular belief, the surname is not a derivative of bonifacius, which means well-doer. An English monk and missionary of this name was martyred in Germany in the mid-8th century, and subsequently was canonized as Saint Boniface.

He lived from (680-755) and whose original name was Winfrid or Winfrith, born at Kirton, or Crediton, in Devonshire. [1]

Also, Pope Boniface VIII had several clashes with King Edward I of England over the taxation of the clergy.

Early Origins of the Bonniface family

The surname Bonniface was first found in Sussex, where "Boniface is an old Sussex name that has characterised the county since the 15th century." [2]

Boniface of Savoy (d. 1270), was Archbishop of Canterbury, and the eleventh child of Thomas I, Ccount of Savoy. "The date of his birth is uncertain; but in his early youth he was destined for an ecclesiastical career. The numerous stock of the house of Savoy had to be provided for, and Boniface seems to have accepted a clerical life as a means of political advancement. " [1]

"Boniface of Savoy, Archbishop of Canterbury (d. 1270), would give an English impetus to this name, just at the time when surnames were becoming hereditary. " [3]

Early History of the Bonniface family

This web page shows only a small excerpt of our Bonniface research. Another 88 words (6 lines of text) covering the years 1190, 1200, 1273, 1456 and 1543 are included under the topic Early Bonniface History in all our PDF Extended History products and printed products wherever possible.

One relatively recent invention that did much to standardize English spelling was the printing press. However, before its invention even the most literate people recorded their names according to sound rather than spelling. The spelling variations under which the name Bonniface has appeared include Bonyface, Boniface, Bonieface, Bonifase, Boneface and others.

More information is included under the topic Early Bonniface Notables in all our PDF Extended History products and printed products wherever possible.

Migration of the Bonniface family

At this time, the shores of the New World beckoned many English families that felt that the social climate in England was oppressive and lacked opportunity for change. Thousands left England at great expense in ships that were overcrowded and full of disease. A great portion of these settlers never survived the journey and even a greater number arrived sick, starving, and without a penny. The survivors, however, were often greeted with greater opportunity than they could have experienced back home. These English settlers made significant contributions to those colonies that would eventually become the United States and Canada. An examination of early immigration records and passenger ship lists revealed that people bearing the name Bonniface arrived in North America very early: Richard Boniface, who arrived in Maryland in 1775.