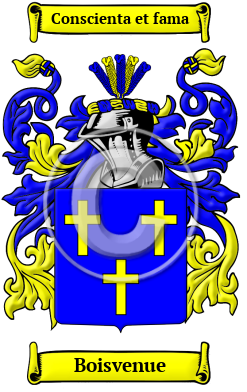 Early Origins of the Boisvenue family

The surname Boisvenue was first found in Normandy (French: Normandie), the former Duchy of Normandy, where they held a family seat in the seigneurie of Bacqueville and were members of the aristocracy of that region.

The earliest of the name on record was Jean Boivan Champeaux, a senator of Normandy living in the 11th century about 1070. Of this main stem of the family Louis Boivin joined William Duke of Normandy in his invasion of England in 1066 and became Chancellor of England and Bishop of Ely. The main stem branched to Bonnetot in Normandy and to Martinière. This latter branch survived the revolution and became Barons of the Empire in 1810. They also branched to Brittany. Meanwhile, an important branch moved to the Franche-Comté. Most other branches lost their estates during the revolution of 1789. The family received letters confirming their nobility in 1826. [1]

Early History of the Boisvenue family

This web page shows only a small excerpt of our Boisvenue research. More information is included under the topic Early Boisvenue History in all our PDF Extended History products and printed products wherever possible.

More information is included under the topic Early Boisvenue Notables in all our PDF Extended History products and printed products wherever possible.

Migration of the Boisvenue family