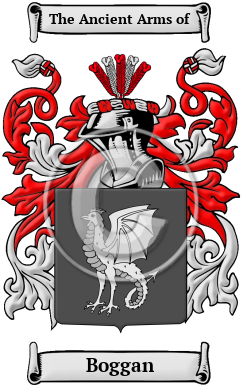 The birthplace of the surname Boggan is Cornwall, a rugged peninsula in southwestern England that is noted for its strong Gaelic traditions. Though surnames became common during medieval times, English people were formerly known only by a single name. The way in which hereditary surnames were adopted in medieval England is fascinating. Under the Feudal System of government, surnames evolved and they often reflected life on the manor and in the field. Despite the fact that occupational surnames are rare among the Cornish People, they nevertheless sometimes adopted surnames derived from the type of work they did. The surname Boggan was an occupational name for a maker of bows. Further research revealed that the name is derived from the Old English word buga or boga, meaning to bend.

Early Origins of the Boggan family

The surname Boggan was first found in Cornwall, in Treleage.

Early History of the Boggan family

This web page shows only a small excerpt of our Boggan research. Another 115 words (8 lines of text) covering the years 1625 and 1659 are included under the topic Early Boggan History in all our PDF Extended History products and printed products wherever possible.

Another 38 words (3 lines of text) are included under the topic Early Boggan Notables in all our PDF Extended History products and printed products wherever possible.

In the United States, the name Boggan is the 17,039th most popular surname with an estimated 2,487 people with that name. [2]

Migration of the Boggan family to Ireland

Some of the Boggan family moved to Ireland, but this topic is not covered in this excerpt.
Another 41 words (3 lines of text) about their life in Ireland is included in all our PDF Extended History products and printed products wherever possible.

Migration of the Boggan family

Research into various historical records has revealed some of first members of the Boggan family to immigrate North America: Ann Bogan who settled in Boston Massachusetts in 1849; Bernard, John, Michael, Patrick, Walter, and William, all arrived in Philadelphia, Pennsylvania between 1840 and 1860..