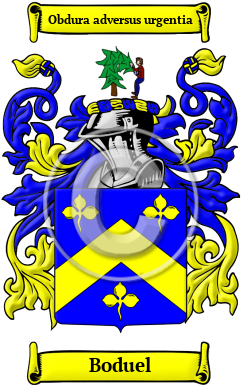 The Scottish surname Boduel comes from a place in Lanarkshire, derived from the Middle English words "bothy," meaning a "small hut," and "well," meaning a "spring," or "stream," or "wyell," which denoted a fishing pool in the river."The place name is derived from a 'weyll' or fishpool in the Clyde." [1]

Another source notes "the name is supposed, by some, to be derived from Both, an eminence, and wall, a castle, terms applied to the parish from the elevated situation of Bothwell Castle above the river Clyde; others derive it from two Celtic words, both, signifying a dwelling, and ael, or hyl, a river, as descriptive of the castle in its contiguity to the river." [2]

Early Origins of the Boduel family

The surname Boduel was first found in Lanarkshire where they held a family seat from very ancient times, possibly even before the Norman Conquest and the arrival of Duke William at Hastings in 1066 A.D. The earliest record found of the name is of William de Bothvile, who witnessed a grant in Circa 1190-1220. A Roger de Bodevill was a juror on inquisition relating to the lands of Hopkelchoc, in 1259. [1]

"As for the antiquity of this name, the first that I have met with is one Arthur Bothwell, of Adam, who was knighted by King James IV., whose son was likewise a knight, called Sir Francis." [3]

Early History of the Boduel family

Spelling variations of this family name include: Bothwell, Borthwell, Bothwel, Borthwel, Bothewell, Boduel and many more.

Notable among the family at this time was Richard de Botheuile, provost of Aberdeen in 1342; and James Hepburn Bothwell (1536-1578), 4th Earl Bothwell, Scottish nobleman, third husband of Mary Queen of Scots Adam Bothwell (1527?-1593), was Bishop...
Another 37 words (3 lines of text) are included under the topic Early Boduel Notables in all our PDF Extended History products and printed products wherever possible.

Migration of the Boduel family to Ireland

Some of the Boduel family moved to Ireland, but this topic is not covered in this excerpt.
Another 59 words (4 lines of text) about their life in Ireland is included in all our PDF Extended History products and printed products wherever possible.

Migration of the Boduel family