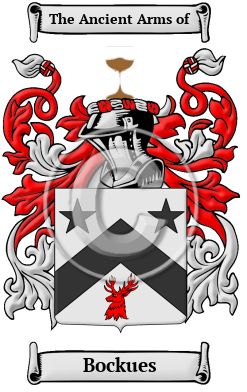 The Bockues family name comes from a place name that was first used among the Viking settlers who arrived in the shores of Scotland in the Middle Ages. The Bockues name comes from someone having lived in a place noted for the presence of a ridge that formed a boundary between two distinct areas. It comes from a variant of the word boak or balk, of the same meaning. While historians generally agree upon the aforementioned topographical derivation, most believe that this name actually came from the area called Boak in the parish of Kirkholm.

Early Origins of the Bockues family

The surname Bockues was first found in Berwickshire an ancient county of Scotland, presently part of the Scottish Borders Council Area, located in the eastern part of the Borders Region of Scotland, where they held a family seat from ancient times, long before the Norman Conquest in 1066.

Early History of the Bockues family

This web page shows only a small excerpt of our Bockues research. Another 92 words (7 lines of text) covering the years 1546, 1576, 1632, 1683 and are included under the topic Early Bockues History in all our PDF Extended History products and printed products wherever possible.

Translation and spelling were non-standardized practices in the Middle Ages, so scribes had only their ears to rely on. This was a practice of extremely limited efficiency, and spelling variations in names, even within a single document, were the result. Over the years, Bockues has appeared Boag, Boig, Book, Boack, Boge, Bogue, Boak, Bouk, Bouck, Bogues, Bogg, Boggs and many more.

More information is included under the topic Early Bockues Notables in all our PDF Extended History products and printed products wherever possible.

Migration of the Bockues family to Ireland

Some of the Bockues family moved to Ireland, but this topic is not covered in this excerpt.
Another 57 words (4 lines of text) about their life in Ireland is included in all our PDF Extended History products and printed products wherever possible.

Migration of the Bockues family

The fertile east coast of what would become US and Canada was soon dotted with the farms of Scottish settlers. Some of them remained faithful to the crown and called themselves United Empire Loyalists, while others had the chance to pay back their old oppressors in the American War of Independence. That brave spirit lives on today in the highland games that dot North America in the summer. Passenger and immigration lists indicate that members of the Bockues family came to North America quite early: Samuel Boag who settled in Savannah, Georgia, in 1820; Antony Boak arrived in Philadelphia in 1872; John Boag settled in Philadelphia in 1852; Anthony arrived in Philadelphia in 1872.