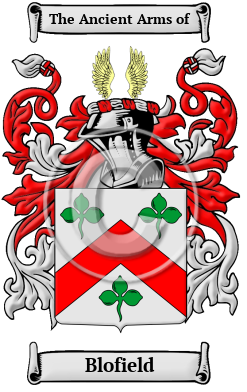 Blofield is an ancient Norman name that arrived in England after the Norman Conquest of 1066. The Blofield family lived in Norfolk, where the family has a rich history dating back many years. Their name, however, derives from their previous locality of residence, Blundeville, near Pont l'Eveque, Normandy. [1]

Early Origins of the Blofield family

The surname Blofield was first found in Cheshire at Beeston, a township, in the parish of Bunbury, union of Nantwich, First division of the hundred of Eddisbury. "This place takes its name from a castle founded by Ranulph de Blundeville, about 1220, and which was made a royal garrison in the war between Henry III. and the confederate barons." [2] He was the son and heir of Hugh 'de Kivelioc,' Earl (palatine) of Chester, whom he succeeded in 1180. "His surname, like his father's, was derived from his birthplace, 'Blundevill' being identified by Dugdale with Oswestry. " [3]

Thomas de Blundeville or Blunville (d. 1236), was Bishop of Norwich. He "was the son of Robert de Blunville of Newton; Flotman, Norfolk, and younger brother of William de Blunville, constable of Corfe Castle during the reign of King John." [3]

However, most sources believe the family was originally from Norfolk as by example, "History or Norfolk" had two early entries for the family using early spellings: John de Blomevile, 1249; and William de Blundevile, 1283 while the Hundredorum Rolls of 1273 had only one entry: William de Blumvile, Norfolk 1273. [4]

Another source notes: "Bloomfield, a village in Worcestershire, and probably other localities. Norfolk has long been the greatest habitat of the name. " [5]

"Bailiffs of Ipswich in the reigns of Edward IV., Henry VII., and Charles II., bore the name of Blomfield. " [6]

Early History of the Blofield family

Norman surnames are characterized by a multitude of spelling variations. The frequent changes in surnames are largely due to the fact that the Old and Middle English languages lacked definite spelling rules. The introduction of Norman French to England, as well as the official court languages of Latin and French, also had pronounced influences on the spelling of surnames. Since medieval scribes and church officials recorded names as they sounded, rather than adhering to any specific spelling rules, it was common to find the same individual referred to with different spellings. The name has been spelled Bloomefield, Blundeville, Blomfield, Blumfield, Blundville and many more.

Outstanding amongst the family at this time was Miles Blomefield (1525-1574?), alchemist, who recorded some particulars of his birth and parentage in a quaint note written by himself in a volume which is preserved in the library of St. John’s College, Cambridge, and which contains a unique copy of ‘the boke...
Another 50 words (4 lines of text) are included under the topic Early Blofield Notables in all our PDF Extended History products and printed products wherever possible.

Migration of the Blofield family to Ireland

Some of the Blofield family moved to Ireland, but this topic is not covered in this excerpt.
Another 51 words (4 lines of text) about their life in Ireland is included in all our PDF Extended History products and printed products wherever possible.

Blofield Settlers in Australia in the 19th Century