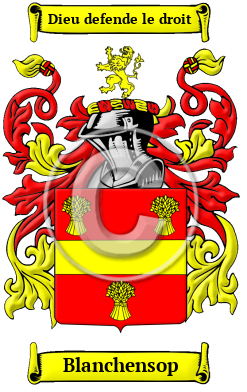 The surname Blanchensop is a habitational name from the village of Blenkinsop in Northumberland, about one mile from Greenhead. The ancient manor of Blenkinsop was held by the Blenkinsop family from the 13th century when they created a substantial tower house. A licence to build the manor was granted on May 6, 1340. A survey of 1541 reported the roof to be in decay and the tower not to be in good repair. Despite the poor repair, the family lived there for another two centuries but by 1832, the property was in disuse. About 1877 William Blenkinsop Coulson did a major restoration project which created a large mansion house but then sold the premises a few years later. A major fire in 1954 resulted in demolition of much of the estate. Today the home is still used but only portions thereof.

Early Origins of the Blanchensop family

The surname Blanchensop was first found in Northumberland, at Blenkinsopp, a township, in the parish and union of Haltwhistle, W. division of Tindale ward. "This has long been the property of the Blenkinsopp family. In 1399 'Thomas de Blencansopp' had a license to fortify his mansion: it occurs in the list of border castles about 1416." [1] "The castle there was the seat of the family, a race well remembered for their border feuds in olden times and designated as 'a right ancient and generous family.' " [2]

Early History of the Blanchensop family

This web page shows only a small excerpt of our Blanchensop research. Another 75 words (5 lines of text) are included under the topic Early Blanchensop History in all our PDF Extended History products and printed products wherever possible.

More information is included under the topic Early Blanchensop Notables in all our PDF Extended History products and printed products wherever possible.

Migration of the Blanchensop family

Gradually becoming disenchanted with life in Ireland many of these uprooted families sailed aboard the armada of sailing ships known as the "White Sails" which plied the stormy Atlantic. These overcrowded ships often arrived with only 60 to 70% of their original passenger list, many dying of cholera, typhoid, dysentery or small pox. In North America, some of the first immigrants who could be considered kinsmen of the Blanchensop family name Blanchensop, or who bore a variation of the surname were James Blinkinsops who settled in Boston Massachusetts in 1848.