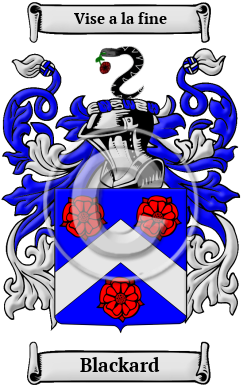 Early Origins of the Blackard family

The surname Blackard was first found in Berwickshire, Scotland, where the family claim descent "from the lands of Blackadder on the stream of the same name in the Merse division of Berwickshire. "Blakadir de eodem in the Earldom of March in 1426. Adam of Blacathathir was one of those sent to conduct the envoys with Princess Cecilia's dower to Edinburgh in 1477, and Charles Blakater had a protection and safe conduct to travel in England in 1486. " [1]

But before these entries, Adam Blacater ( fl. 1319), "was descended from a family of good position in Scotland, and after studying at several universities on the continent became successively professor of philosophy at Cracow in Poland, professor of the same subject at Bologna, and rector of one of the colleges of the university of Paris. " [2]

Cuthbert Blackadder (d. 1485), was "a chieftain of the Scottish border, received his surname and estate from James II in 1452 for his success in repelling the English marauders on the Scottish frontier. By his prowess he earned for himself the title of the 'chieftain of the south.' He and his seven sons who accompanied him on his expeditions were also named, from the darkness of their complexions, the 'Black band of the Blackaders.' When the kingdom was placed in a posture of defence against Edward IV, the Blackaders raised a force of two hundred and seventeen men, and also planted their castle with artillery, and left in it a strong garrison. " [2]

Early History of the Blackard family

The name Blackard, appeared in many references, and from time to time, the surname was spelt Blackadder, Blackader, Blackater, Blacketter, Blaicketter, Blacader and many more.

Notable amongst the family name during their early history was Robert Blackadder (died 1508) a medieval Scottish cleric, diplomat and politician, who was Abbot of Melrose, Bishop-elect of Aberdeen and Bishop of Glasgow; Sir Alexander Blackadder; John Blackadder (1615-1686), Scottish Covenanting minister; John Blackadder (or Blackader) (ca. 1622-1685), a Scottish eminent Presbyterian Covenanter preacher; Sir...
Another 54 words (4 lines of text) are included under the topic Early Blackard Notables in all our PDF Extended History products and printed products wherever possible.

Blackard migration to the United States +

The New World beckoned as many of the settlers in Ireland, known as the Scotch/Irish, became disenchanted. They sailed aboard the armada of sailing ships known as the "White Sails" which plied the stormy Atlantic. Some called them, less romantically, the "coffin ships." Amongst the early settlers who could be considered kinsmen of the Blackard family, or who bore a variation of the surname Blackard were

Blackard Settlers in United States in the 17th Century

Blackard Settlers in United States in the 20th Century