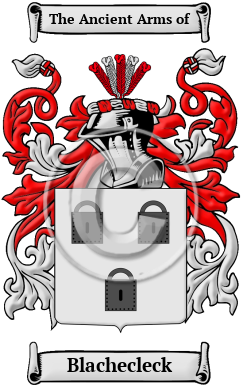 The saga of the name Blachecleck begins with a Strathclyde-Briton family in the ancient Scottish/English Borderlands. It is a name for a person with dark hair. As such, the Blachecleck surname most likely evolved from a nickname from the Middle English "blakelok," in turn from the Old English blec, meaning "black," or "dark," and locc, meaning a "lock of hair." [1]

Early Origins of the Blachecleck family

The surname Blachecleck was first found in Wiltshire where Peter Blacloke was listed in the Hundredorum Rolls of 1273. [3]

Early History of the Blachecleck family

Spelling and translation were hardly exact sciences in Medieval Scotland. Sound, rather than any set of rules, was the basis for spellings, so one name was often spelled different ways even within a single document. Spelling variations are thus an extremely common occurrence in Medieval Scottish names. Blachecleck has been spelled Blacklock, Blakelock, Blacklocke, Blakelocke, Blaikelock, Blaiklock and many more.

Another 27 words (2 lines of text) are included under the topic Early Blachecleck Notables in all our PDF Extended History products and printed products wherever possible.

Migration of the Blachecleck family