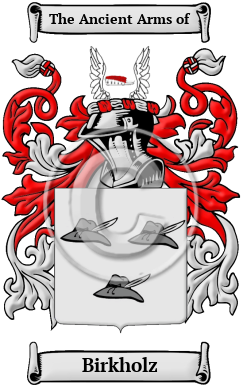 The colorful history of Saxony provides a glimpse at the oldest origins of the Birkholz family. In the medieval era, the German lands were inhabited by a variety of Barbarian tribes. The ancient dukedom of Saxony derived its name from the Germanic tribe name the Saxons who inhabited the territory after the fall of the Roman Empire.

Early Origins of the Birkholz family

The surname Birkholz was first found in Saxony, where this family name became a prominent contributor to the development of the district from ancient times. The Birckholtz ancestral seat was located in the district of Stendal in Altmark. From here members moved to Mittelmark, Neumark, Saxony, Silesia, Pomerania, and Sweden. They acquired a large number of prominent estates in these regions. Always prominent in social affairs, the name became an integral part of that turbulent region as it emerged to form alliances with other families within the Feudal System and the nation.

Early History of the Birkholz family

This web page shows only a small excerpt of our Birkholz research. Another 143 words (10 lines of text) covering the year 1400 is included under the topic Early Birkholz History in all our PDF Extended History products and printed products wherever possible.

Another 40 words (3 lines of text) are included under the topic Early Birkholz Notables in all our PDF Extended History products and printed products wherever possible.

In the United States, the name Birkholz is the 10,949th most popular surname with an estimated 2,487 people with that name. [1]

Birkholz migration to the United States +

Birkholz Settlers in United States in the 19th Century