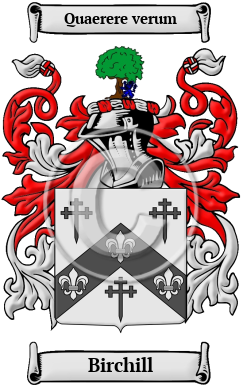 The name Birchill first arose amongst the Anglo-Saxon tribes of Britain. It is derived from their having lived in one of two towns called Birchill in the counties of Derbyshire and Staffordshire. Alternatively the family could have originated in the parish of Bircholt, in the union of East Ashford, franchise and barony of Bircholt, lathe of Shepway, E. division of Kent. [1] [2]

Early Origins of the Birchill family

The surname Birchill was first found in Cheshire, where John de Birchall de Birtles, of Gawsworth was first recorded in 1401. Later the Wills at Chester included entries for Richard Birchall, of Parr, webster, 1581; James Birchall, of Winwick; 1591; and Geoffrey Birchall, of Croft, in Winwick, 1614. [3]

Early History of the Birchill family

This web page shows only a small excerpt of our Birchill research. Another 80 words (6 lines of text) covering the years 1784 and 1805 are included under the topic Early Birchill History in all our PDF Extended History products and printed products wherever possible.

One relatively recent invention that did much to standardize English spelling was the printing press. However, before its invention even the most literate people recorded their names according to sound rather than spelling. The spelling variations under which the name Birchill has appeared include Birchall, Birchill, Birchalls, Birchills and many more.

Distinguished members of the family include Robert Birchall, a London music-publisher said to have been apprenticed to Randall, the successor of Walsh who established a musical circulating library about 1784. Prior to which, he had been associated in business with Beardmore and also with Andrewes, successively at 129...
Another 47 words (3 lines of text) are included under the topic Early Birchill Notables in all our PDF Extended History products and printed products wherever possible.

Birchill Settlers in Australia in the 19th Century