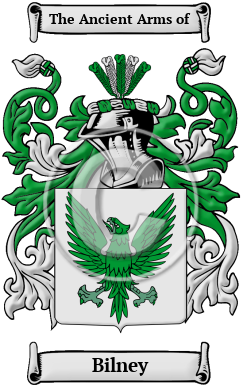 The present generation of the Bilney family is only the most recent to bear a name that dates back to the ancient Anglo-Saxon culture of Britain. Their name comes from having lived in the parish of Bilney in Norfolk. The name literally means the dweller by the stream.

Early Origins of the Bilney family

The surname Bilney was first found in Norfolk at East Bilney, a parish, in the union of Mitford and Launditch, hundred of Launditch. The place name literally means "island near a ridge," or "island of a man called Bil(l)a," from the Old English word "bile," or the Old English personal name. [1] West Bilney dates back to the Domesday Book of 1086 where it was listed as Bilenei [2] and East Bilney dates back to 1254 when it was first listed a Billney. "Thomas Bilney (c. 1495-1531), a learned divine, who was burnt at Norwich, in the year 1531, for preaching against popery, is said to have been born here." [3]

"He was a member of a Norfolk family which took its name from the villages of the same designation in that county. Local historians assert that he was born either at East Bilney or Norwich; but these statements seem to rest on probability rather than definite evidence. " [4]

Early History of the Bilney family

Until the dictionary, an invention of only the last few hundred years, the English language lacked any comprehensive system of spelling rules. Consequently, spelling variations in names are frequently found in early Anglo-Saxon and later Anglo-Norman documents. One person's name was often spelled several different ways over a lifetime. The recorded variations of Bilney include Bilney, Bilnie, Bylyne, Bilneye, Bilnye, Bilnay and others.

Another 28 words (2 lines of text) are included under the topic Early Bilney Notables in all our PDF Extended History products and printed products wherever possible.

Bilney Settlers in Australia in the 19th Century