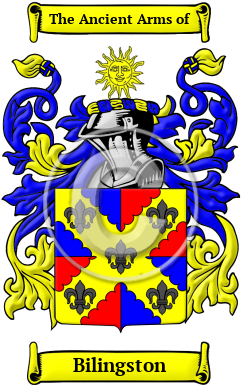 The name Bilingston comes from one of the family having worked as a person who lived at one of several settlements named Billington in the counties of Bedfordshire, Lancashire, or Staffordshire. Early spellings of the place name include: Billendon, Bedfordshire in 1196 and Billingduna, Lancashire in the same year. [1] It is generally thought the place name meant "hill with a sharp ridge," from the Old English word "billing" + "dun" or "hill of a man called Billa." [1]

Early Origins of the Bilingston family

The surname Bilingston was first found in Lancashire at Billington, a township and district chapelry, in the parish, union, and Lower division of the hundred, of Blackburn. [2] The town has been listed various spellings over the years: Billindon (1203); Billinton (1208); Bilingdon (1241) and later as Belyngton or Bilyngton. This area "is supposed to have been the scene of a battle that occurred between Wada, a Saxon duke, one of the murderers of Ethelred, and Ardulph, King of Northumbria, in the year 798, when the former was defeated." [2] While the surname was primarily found in Lancashire, we must look of Staffordshire to find the first record, specifically Robert de Billington who was listed there in the Assize Rolls of 1203. [3] William de Bilington was listed in the Lay Subsidy Rolls of Lancashire in 1332 as was Adam de Billington. In nearby Yorkshire, Johannes de Billyngton was listed in the Yorkshire Poll Tax Rolls of 1379. [4]

Early History of the Bilingston family

This web page shows only a small excerpt of our Bilingston research. Another 68 words (5 lines of text) covering the years 1575, 1663, 1595, 1737, 1580 and 1630 are included under the topic Early Bilingston History in all our PDF Extended History products and printed products wherever possible.

Spelling variations in names were a common occurrence before English spelling was standardized a few hundred years ago. In the Middle Ages, even the literate spelled their names differently as the English language incorporated elements of French, Latin, and other European languages. Many variations of the name Bilingston have been found, including: Billington, Billingston, Billingdon and others.

Another 49 words (4 lines of text) are included under the topic Early Bilingston Notables in all our PDF Extended History products and printed products wherever possible.

Migration of the Bilingston family to Ireland

Some of the Bilingston family moved to Ireland, but this topic is not covered in this excerpt. More information about their life in Ireland is included in all our PDF Extended History products and printed products wherever possible.

Migration of the Bilingston family

Families began migrating abroad in enormous numbers because of the political and religious discontent in England. Often faced with persecution and starvation in England, the possibilities of the New World attracted many English people. Although the ocean trips took many lives, those who did get to North America were instrumental in building the necessary groundwork for what would become for new powerful nations. Among the first immigrants of the name Bilingston, or a variant listed above to cross the Atlantic and come to North America were : John Billington who sailed on the " Mayflower" and arrived in Plymouth in 1620; with his wife Helen and two sons, Francis and John, and daughter, Ellen..