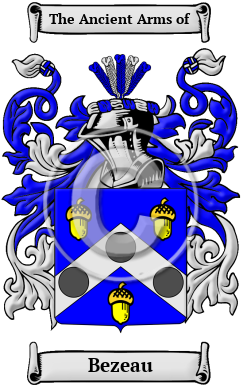 The ancient history of the Bezeau name begins in the Middle Ages in the northern coastal region of Normandy. The name is derived from when the family resided in Bretagne, where the family held a family seat since the early Middle Ages.

Early Origins of the Bezeau family

The surname Bezeau was first found in Brittany (Bretagne) where the family held a family seat in early times. [1]

Alain Bedel, a knight, is mentioned in historic documents. The members of the different branches of the family became the lords of la Reignerais, in the diocese of Saint-Brieuc, and the lords of Lairye and of Tertre, in the region of Vannes. The branch Bedel reaffirmed its title to nobility in the year 1666 in Normandy. [1]

Isaac Bedard, born in 1616, was a carpenter that travelled from France to Canada on 1st May 1662 along with his wife, Marie (née Girard). Together they had three children, two of which were sons, Louis and Jacques, that carried on the family name of Bedard. Isaac died in Charlesbourg, Quebec and was buried on 15th January 1689. [2]

Early History of the Bezeau family

This web page shows only a small excerpt of our Bezeau research. Another 35 words (2 lines of text) covering the years 1666, 1804, 1810, 1847, and 1863 are included under the topic Early Bezeau History in all our PDF Extended History products and printed products wherever possible.

Most surnames have experienced slight spelling changes. A son may not chose to spell his name the same way that his father did. Many were errors, many deliberate. During the early development of the French language, a person usually gave his version, phonetically, to a scribe, a priest, or a recorder. Prefixes or suffixes varied. They were optional as they passed through the centuries, or were adopted by different branches to signify either a political or religious adherence. Hence, there a many spelling variations of the name Bezeau, including Bédel, Bedel, Bedeau, Bedaux, Bedaud, Bédard, Bedard, Bédat, Bedat, Bédarieux, Bédarrieux, Bédarride, Bédarridat, Dubédel, Dubedel, Dubedeau, Dubedaux, Dubedaud, Dubedat and many more.

Another 36 words (3 lines of text) are included under the topic Early Bezeau Notables in all our PDF Extended History products and printed products wherever possible.

Immigration to New France was slow; therefore, early marriage was desperately encouraged amongst the immigrants. The fur trade attracted migrants, both noble and commoner. 15,000 explorers left Montreal in the late 17th and 18th centuries. By 1675, there were 7000 French in Quebec. By the same year the Acadian presence in Nova Scotia, New Brunswick and Prince Edward Island had reached 500. In 1755, 10,000 French Acadians refused to take an oath of allegiance to England and were deported to Louisiana. The French founded Lower Canada, thus becoming one of the two great founding nations of Canada. The distinguished family name Bezeau has made significant contributions to the culture, arts, sciences and religion of France and New France. Amongst the settlers in North America with this distinguished name Bezeau were

Bezeau Settlers in Canada in the 17th Century

Bezeau Settlers in Canada in the 18th Century