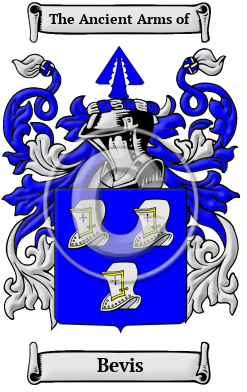 The Norman Conquest of England in 1066 brought many new words to England from which surnames were formed. Bevis was one of these new Norman names. It was specifically tailored to its first bearer, who was a friend, and is a somewhat nondescript form of affectionate address, somewhat like pal or mate in modern English. The name translates from the Old French root belfiz of the same meaning. The modern French meaning of the word as son in law was not in place until 1468.

Other sources claim that the name is a local surname from Beauvais in France. and there, we found that "Duke Richard II. in 1027, confirmed the gift of Ansgot de Belvai of land at Belvai to Fescamp Abbey. Fescamp (Fécamp) Abbey is a Benedictine abbey in Fécamp, Seine-Maritime, Upper Normandy, France. [1] [2] Founded in 658 by Waningus, a Merovingian count, the abbey still stands today.

As to agree with this postulation, another source weighs in on the debate by simply stating "The town of Beauvais, in France, is however a more likely source for the surname." [3] This author continues "Sir Bevys of medieval romance seems to have no place in veritable history, though Heylin claims him as a real Earl of Southampton. The first instance of the surname that I can call to mind is in Sir John Bevis, or Befs, who took Richard, brother of King Henry III., prisoner in a windmill at the battle of Lewes, in 1264. " [3]

Early Origins of the Bevis family

The surname Bevis was first found in Hampshire, where they were granted lands by King William after the Norman Conquest in 1066. They were descended from the Beauvais in Normandy, and appear on the honor roll of Battell Abbey, as accompanying Duke William at Hastings in 1066 A.D.

Early History of the Bevis family

Endless spelling variations are a prevailing characteristic of Norman surnames. Old and Middle English lacked any definite spelling rules, and the introduction of Norman French added an unfamiliar ingredient to the English linguistic stew. French and Latin, the languages of the court, also influenced spellings. Finally, Medieval scribes generally spelled words according to how they sounded, so one person was often referred to by different spellings in different documents. The name has been spelled Bevis, Bevys, Beavis, Beavys and others.

Outstanding amongst the family at this time was Sir Bevis of Hampshire; and John Bevis (1693-1771), an Welsh doctor and astronomer, best known for discovering the Crab Nebula in 1731. "Born 31 Oct. 1693...
Another 34 words (2 lines of text) are included under the topic Early Bevis Notables in all our PDF Extended History products and printed products wherever possible.

In the United States, the name Bevis is the 8,966th most popular surname with an estimated 2,487 people with that name. [4]

Bevis migration to the United States +

To escape the political and religious persecution within England at the time, many English families left for the various British colonies abroad. The voyage was extremely difficult, though, and the cramped, dank ships caused many to arrive in the New World diseased and starving. But for those who made it, the trip was most often worth it. Many of the families who arrived went on to make valuable contributions to the emerging nations of Canada and the United States. An inquiry into the early roots of North American families reveals a number of immigrants bearing the name Bevis or a variant listed above:

Bevis Settlers in United States in the 17th Century

Bevis Settlers in United States in the 18th Century

Historic Events for the Bevis family +