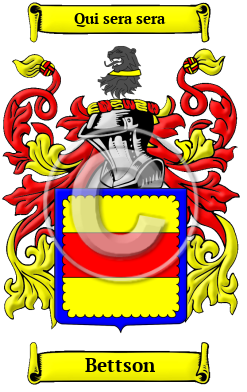 Early Origins of the Bettson family

The surname Bettson was first found in Yorkshire where Johannes Betonson and Willelmus Betonson were both listed as holding lands in the Yorkshire Poll Tax Rolls of 1379. [1]

However, another source claims that "Bettinson is at present a Norfolk surname occurring mostly in and around Wisbech. There were freeholders named Bettison in Nottinghamshire in 1698." [2]

"Grylls, [in the parish of Lesnewth, Cornwall] which is now a farm house, was formerly the seat of a family called Betenson." [3]

Early History of the Bettson family

Another 49 words (4 lines of text) are included under the topic Early Bettson Notables in all our PDF Extended History products and printed products wherever possible.

Migration of the Bettson family

For many English families, the political and religious disarray that shrouded England made the far away New World an attractive prospect. On cramped disease-ridden ships, thousands migrated to those British colonies that would eventually become Canada and the United States. Those hardy settlers that survived the journey often went on to make important contributions to the emerging nations in which they landed. Analysis of immigration records indicates that some of the first North American immigrants bore the name Bettson or a variant listed above: Harry Bettenson, aged 46, who arrived at Ellis Island, in 1904; Claudine Betson, aged 18, who arrived at Ellis Island from Barbados, in 1906; Jessie Betson, aged 29, who arrived at Ellis Island, in 1922.