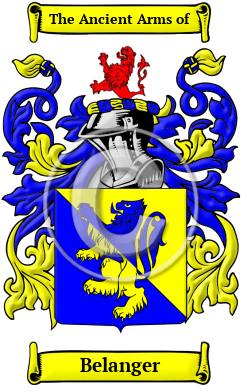 Normandy is the region of ancient France from which the name Belanger was derived. It comes from when the family lived at Anger in Normandy. The prefix of the name, "bel", means beautiful and it is believed that it was originally describing the place that it originates from as beautiful.

Early Origins of the Belanger family

The surname Belanger was first found in Normandy (French: Normandie), the former Duchy of Normandy, where they held a family seat from ancient times.

The family branched into different regions of France including Poitou, and the lands of Hainière in Flanders (Belguim) where they adapted the spelling of their name to Boulengier and appear as a notable family in that region. Additionally, they held the estates of Pistor in Lorraine, and Montigny in Hainaut. By the 16th century, the family branched again and acquired estates at Remfort in Anjou, Thorigny in Maine and Brie. Many members of the Thorigny family contributed greatly during the conflicts of the times and are recorded as esteemed individuals. [1]

François Belanger, born in 1612, son of François and Françoise (née Horlays), travelled from Saint-Pierre de Seez to Quebec in 1636. He married Marie Guyon on 12th July 1637 and together they had thirteen children, five of which were sons that carried on the family name of Belanger. [2]

Early History of the Belanger family

This web page shows only a small excerpt of our Belanger research. Another 69 words (5 lines of text) covering the year 1066 is included under the topic Early Belanger History in all our PDF Extended History products and printed products wherever possible.

French surnames were subject to numerous alterations in spelling because of the various cultural groups that inhabited specific regions. Eventually, each region possessed its own local dialect of the French language. The early development of the French language, however, was also influenced by other languages. For example, Old French was infused with Germanic words and sounds when barbarian tribes invaded and settled in France after the fall of the Roman Empire. Middle French also borrowed heavily from the Italian language during the Renaissance. As a result of these linguistic and cultural influences, the name Belanger is distinguished by a number of regional variations. The many spelling variations of the name include Belanger, Belangée, Bellanger, Belenger, Baranger, Barranger, Barringer, Bellenger, Bellinguier, Beranger, Beringer, Beringier, Beringuier, Bezanger, Boulanger, Belanget, Bellanget, Belenget, Bellenget, Bellinger and many more.

Notable amongst the family in this period was Lord Bellanger of Thorigny; and Jean Boulanger (1606-1660), a French artist active in Italy during the Baroque period, probably best known for his frescoes at the Ducal palace of Sassuolo. Mme. Marie Julie Boulanger, (née Halligner), born 1786, died 1850; was a dramatic singer. She studied in the Conservatoire under...
Another 57 words (4 lines of text) are included under the topic Early Belanger Notables in all our PDF Extended History products and printed products wherever possible.

Belanger migration to the United States +

In 1643, 109 years after the first landings by Cartier, there were only about 300 people in Quebec. Migration was slow. The fur trade attracted migrants, both noble and commoner. By 1675, there were 7000 French in Quebec. By the same year the French Acadian presence in the Maritimes had reached 500. The French founded Lower Canada, thus becoming one of the two great founding nations of Canada. The family name Belanger has made many distinguished contributions in France and New France to the world of science, culture, religion, and education. Amongst the settlers in North America with this distinguished name Belanger were

Belanger Settlers in United States in the 17th Century

Belanger Settlers in United States in the 18th Century

Belanger Settlers in United States in the 19th Century

Belanger Settlers in United States in the 20th Century

Belanger Settlers in Canada in the 17th Century

Belanger Settlers in Canada in the 18th Century

Belanger Settlers in Canada in the 20th Century