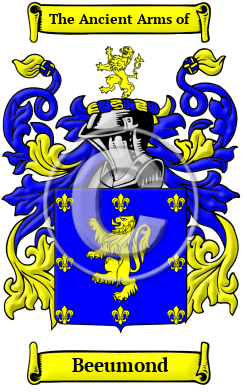 Beeumond is one of the thousands of new names that the Norman Conquest brought to England in 1066. The Beeumond family lived in Dorset and Gloucestershire. The geographical derivation of the name, however, does not stem from these locations, but relates to numerous areas in France, which are so named.

Early Origins of the Beeumond family

The surname Beeumond was first found in Dorset and Gloucestershire, where "Roger de Belmont appears in [the] Domesday [Book] as chief tenant. According to Sir H. Ellis, he was a near kinsman of the Conqueror, being lineal descendant of that king's great grandfather. Some trace the noble English families from the Viscounts Beaumont of Normandy, and others from the blood-royal of France." [1]

The chapelry of Ryall in Northumberland is of particular interest to the family. "This was the lordship of John, Lord Beaumont, who died seised of Ryall about the year 1396, leaving it, with many other estates in this county and elsewhere, to his son and heir, Henry, then sixteen years of age, who was knighted at the coronation of Henry IV." [2]

Upper Whitley in the West Riding of Yorkshire was home to another branch of the family. "The founder of the ancient family of Beaumont here, was a Knight Hospitaller of St. John of Jerusalem, who received the manor on condition of performing certain military services in the time of Henry III. Whitley Hall has ever since been the principal residence of the family, and is now in the possession of R. H. Beaumont, Esq. [(c. 1860)]" [2]

Robert de Beaumont (d. 1118), was Count of Meulan, a feudal statesman and son of Roger de Beaumont ('de Bellomonte' in the Latinized form) and grandson of Humfrey de Vielles. [3]

His son, Robert de Beaumont Earl of Leicester (1104-1168), was Justiciary of England, and a twin with his brother Waleran.

Waleran de Beaumont Count of Meulan (1104-1166), was a warrior and feudal statesman and twin brother of Robert, Earl of Leicester.

Early History of the Beeumond family

Outstanding amongst the family at this time was Viscount Allandale; Henry de Beaumont, 4th Earl of Buchan (circa 1305-1340), a military tactician, who was made the 1st Baron Beaumont in 1309; Sir William de Beaumont, 2nd Viscount Beaumont (1438-1507), fought in several of the major battles of the Wars of the Roses, probably knighted before the Battle of Northampton; Francis Beaumont (c.1585-1616), a British playwright...
Another 65 words (5 lines of text) are included under the topic Early Beeumond Notables in all our PDF Extended History products and printed products wherever possible.

Migration of the Beeumond family to Ireland

Some of the Beeumond family moved to Ireland, but this topic is not covered in this excerpt. More information about their life in Ireland is included in all our PDF Extended History products and printed products wherever possible.

Migration of the Beeumond family

Because of this political and religious unrest within English society, many people decided to immigrate to the colonies. Families left for Ireland, North America, and Australia in enormous numbers, traveling at high cost in extremely inhospitable conditions. The New World in particular was a desirable destination, but the long voyage caused many to arrive sick and starving. Those who made it, though, were welcomed by opportunities far greater than they had known at home in England. Many of these families went on to make important contributions to the emerging nations of Canada and the United States. Analysis of immigration records indicates that some of the first North American immigrants bore the name Beeumond or a variant listed above: John Beamond who settled in Virginia in 1635; Andrew Beaumont settled in New England in 1805; Richard Beamond settled in New Jersey in 1664.