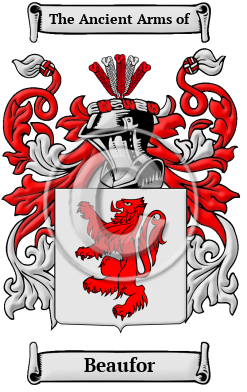 Early Origins of the Beaufor family

The surname Beaufor was first found in Norfolk where they conjecturally descend from the tenant of the village and lands of Swanton Morely, held by William de Beaufou, a Norman Baron, son William de Beaufoe, Bishop of Thetford and Chancellor to the Conqueror, who was recorded in the Domesday Book census of 1086.

William Beaufeu (d. 1091), Bishop of Thetford, was, apparently, a son of Robert Sire de Belfou, who fought on the Conqueror's side at Senlac. [1]

Robert de Beaufeu, Bellofago or Bellofocco (fl. 1190), was a secular canon of Salisbury. "At an early age, a reputation for learning, and became the friend of Giraldus Cambrensis, Walter Map, and other scholars. He is said to have written a work entitled 'Encomium Topographiæ,' " [1]

Roger Beaufeu or Bello Fago (fl. 1305), was an early judge, probably of the same family as Nicholas de Beaufo of Beaufo's Manor, Norfolk, a contemporary of the judge. "One Radulphus de Bello or Bella Fago (both genders are found, though the masculine predominates) is mentioned in Domesday Book as holding extensive estates in Norfolk, and the bishop of Thetford also there mentioned we know from other sources to have been William de Beaufo, called by Godwin inaccurately Galsagus, and by others still more corruptly Welson. It may be mentioned in passing that many other varieties of the name are found, such as Belfagus, Beaufou, Beaufogh, Beaufour, Belflour, Beufo, Beufew, and, in the eighteenth century, Beaufoy. " [1]

Early History of the Beaufor family

This web page shows only a small excerpt of our Beaufor research. Another 115 words (8 lines of text) covering the years 1306, 1603 and 1090 are included under the topic Early Beaufor History in all our PDF Extended History products and printed products wherever possible.

It is only in the last few hundred years that the English language has been standardized. For that reason, Anglo-Norman surnames like Beaufor are characterized by many spelling variations. Scribes and monks in the Middle Ages spelled names they sounded, so it is common to find several variations that refer to a single person. As the English language changed and incorporated elements of other European languages such as Norman French and Latin, even literate people regularly changed the spelling of their names. The variations of the name Beaufor include Beaufou, Beaufois, Bellofago, Beaufloe, Beauflower, Bouffler, Beaufoy, Bowflower, Beauflour, Beauforest, Beaufor, Bofor, Bowfor and many more.

Another 32 words (2 lines of text) are included under the topic Early Beaufor Notables in all our PDF Extended History products and printed products wherever possible.

Migration of the Beaufor family

Faced with the chaos present in England at that time, many English families looked towards the open frontiers of the New World with its opportunities to escape oppression and starvation. People migrated to North America, as well as Australia and Ireland in droves, paying exorbitant rates for passages in cramped, unsafe ships. Many of the settlers did not make the long passage alive, but those who did see the shores of North America were welcomed with great opportunity. Many of the families that came from England went on to make essential contributions to the emerging nations of Canada and the United States. Some of the first immigrants to cross the Atlantic and come to North America carried the name Beaufor, or a variant listed above: the name represented in many forms and recorded from the mid 17th century in the great migration from Europe. Migrants settled in the eastern seaboard from Newfoundland, to Maine, to Virginia, the Carolinas, and to the islands..