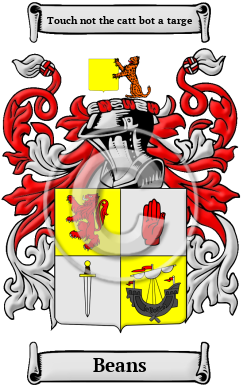 The Picts were the ancient Scottish tribe where the ancestors of the Beans family lived. The name Beans comes from the Gaelic word Beathan or betha which means life. Bean was also the name of a saint in the Breviary of Aberdeen.

Early Origins of the Beans family

The surname Beans was first found in Aberdeen (part of the modern Grampian region), where one of the first times the name arose was a Bean who was a magistrate circa 1210. It is known, however, that the MacBains moved to Invernessshire, as sod bearers to the Chiefs of the great Clan Chattan (a powerful confederation of early Clans). The name literally means "son of the fair lad," and was frequently translated to MacBean (Bain.)

Saint Bean or Beyn (fl. 1011), was, according to Fordun, appointed first bishop of Murthlach by Malclom II, at the instance of Pope Benedict VIII. A fragment of the charter of Malcolm II (1003-1029?), preserved in the register of the diocese of Aberdeen confirms this claim. [1] However, St. Bean is distinctly referred to as a native of Ireland: 'In Hybernia natalis Beani primi episcopi Aberdonensis et confessoris'. [1]

Early History of the Beans family

This web page shows only a small excerpt of our Beans research. Another 139 words (10 lines of text) covering the years 1411, 1400, 1550 and 1745 are included under the topic Early Beans History in all our PDF Extended History products and printed products wherever possible.

When the first dictionaries were invented in the last few hundred years, spelling gradually became standardized. Before that time, scribes spelled according to sound. Names were often recorded under different spelling variations every time they were written. Beans has been written Bean, Beane, Beyn, Bayn, Bene, Bane, Baine, Beine, Bayne, Beyne, Been, Beaine, MacBain, MacBean, MacVain, MacBean, MacVan and many more.

More information is included under the topic Early Beans Notables in all our PDF Extended History products and printed products wherever possible.

Migration of the Beans family to Ireland

Some of the Beans family moved to Ireland, but this topic is not covered in this excerpt. More information about their life in Ireland is included in all our PDF Extended History products and printed products wherever possible.

Beans migration to the United States +

The crossing to North America did not seem so great in comparison with the hardships many Scots endured at home. It was long, expensive, and cramped, but also rewarding. North America offered land and the chance for settlers to prove themselves in a new place. And many did prove themselves as they fought to forge a new nation in the American War of Independence. The ancestors of those Scots can now experience much of their once-lost heritage through the Clan societies and highland games that have sprung up across North America in the last century. A search of immigration and passenger lists revealed many important, early immigrants to North America bearing the name of Beans:

Beans Settlers in United States in the 17th Century

Beans Settlers in United States in the 18th Century

Beans Settlers in United States in the 19th Century