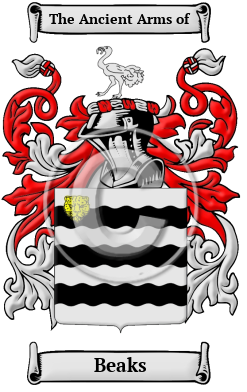 As a result of the frequent commercial intercourse between the Flemish and English nations, many Flemish migrants settled in Britain. The Beaks history starts with such a migration. As the population grew and people traveled further afield, it became increasingly necessary to assume an additional name to differentiate between bearers of the same personal name. A broad and miscellaneous class of surnames, nickname surnames refers either directly or indirectly to a characteristic of the first person who used the name. They can describe the bearer's favored style of clothing, physical appearance, habits, or character, among other attributes. Flemish names of this type frequently feature the prefixes lile, which meant the. The surname Beaks is a nickname for a person with a prominent nose. Looking back further, we find the name Beaks was originally from the Old English word beke or the Old French word bec, each of which referred to the beak of a bird. Since the 11th century in England was a time of the mingling of may languages it is often difficult to tell which particular linguistic root is appropriate to a name in a given case.

Early Origins of the Beaks family

The surname Beaks was first found in Dorset and Kent where they held a family seat from early times, and was one of the earliest of all Flemish settlers. The earliest recorded settler was Goisfred de Beche, whose original Flemish name was Van der Beke, and in east Kent the family acquired the estate of Livingsbourne, where they changed the name of the town to Beakesbourn.

Early History of the Beaks family

Prominent in the family at this time was Baron Beeke of Eresby in Kent; Richard Beke (1630-1707), of Westminster and Ford, Dinton, Buckinghamshire, an English politician, Member of Parliament for Elgin and Nairn in...
Another 34 words (2 lines of text) are included under the topic Early Beaks Notables in all our PDF Extended History products and printed products wherever possible.

Migration of the Beaks family to Ireland

Some of the Beaks family moved to Ireland, but this topic is not covered in this excerpt. More information about their life in Ireland is included in all our PDF Extended History products and printed products wherever possible.

Beaks migration to the United States +

Analysis of immigration records indicates that some of the first North American immigrants bore the name Beaks or a variant listed above:

Beaks Settlers in United States in the 17th Century

Beaks Settlers in United States in the 19th Century