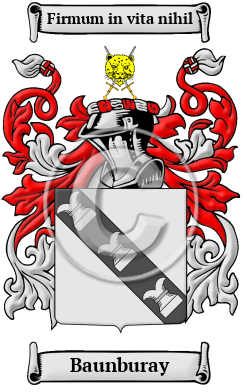 The name Baunburay was brought to England in the great wave of migration following the Norman Conquest of 1066. The Baunburay family lived in Cheshire, where they were located since the early Middle Ages. The family name is derived from the area Bunbury, near Nantwich in this shire. The name Bunbury derives from the Old English personal name Buna, and the burh, which means "fortress."

Early Origins of the Baunburay family

The surname Baunburay was first found in Cheshire at Bunbury, a village and civil parish now in the unitary authority of Cheshire East. The village dates back to the Domesday Book of 1086 where it was first listed as Boleberie [1] and literally meant "stronghold of a man called Buna," from the Old English personal name + "burh." [2] The family of "great antiquity, descended from Henry de Boneberi, in the time of Stephen, a younger brother of the House of St. Pierre in Normandy. William de Boneberi, son of Henry, was Lord of Beneberi in the reign of Richard I." [3] As a cadet of the Norman house of St. Pierre who accompanied Hugh Lupus, Earl of Chester, at the Conquest, they obtained from him the manor of Bunbury. The family has held estates in the area for many centuries. By example, the extra-parochial liberty Great Stanney in Cheshire was held by the family since ancient times. " The ancient mansion here of the family of Bunbury, called Rake Hall, has been repaired by its present owner, Sir Henry Bunbury, Bart.; several farm-buildings have been erected, and the roads much improved." [4] Nearby, Little Stanney was also property of Sir Henry Bunbury. A most benevolent family, Sir Thomas Bunbury, founded a free school with £5 per annum.

Early History of the Baunburay family

Norman surnames are characterized by a multitude of spelling variations. The frequent changes in surnames are largely due to the fact that the Old and Middle English languages lacked definite spelling rules. The introduction of Norman French to England, as well as the official court languages of Latin and French, also had pronounced influences on the spelling of surnames. Since medieval scribes and church officials recorded names as they sounded, rather than adhering to any specific spelling rules, it was common to find the same individual referred to with different spellings. The name has been spelled Bunbury, Baunbury, Bunby, Bunbry, Bunberry and others.

Another 45 words (3 lines of text) are included under the topic Early Baunburay Notables in all our PDF Extended History products and printed products wherever possible.

Migration of the Baunburay family to Ireland

Some of the Baunburay family moved to Ireland, but this topic is not covered in this excerpt.
Another 92 words (7 lines of text) about their life in Ireland is included in all our PDF Extended History products and printed products wherever possible.

Migration of the Baunburay family

Many English families emigrated to North American colonies in order to escape the political chaos in Britain at this time. Unfortunately, many English families made the trip to the New World under extremely harsh conditions. Overcrowding on the ships caused the majority of the immigrants to arrive diseased, famished, and destitute from the long journey across the stormy Atlantic. Despite these hardships, many of the families prospered and went on to make invaluable contributions to the development of the cultures of the United States and Canada. Early North American immigration records have revealed a number of people bearing the name Baunburay or a variant listed above: T. Bunbury who arrived in Baltimore in 1820.