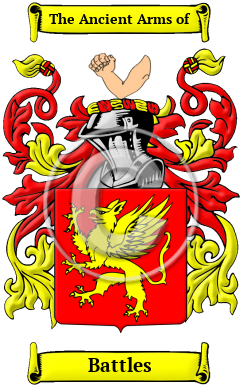 The roots of the Battles family stretch back to the Strathclyde people of the Scottish/English Borderlands, who were the first to use the surname. It is derived from any of several place names in England, such as Battle in Sussex. Contrary to what one would expect, the name is not a nickname or occupational name derived from the word battle.

Early Origins of the Battles family

The surname Battles was first found in Berwickshire an ancient county of Scotland, presently part of the Scottish Borders Council Area, located in the eastern part of the Borders Region of Scotland, Scotland.

Early History of the Battles family

The variation in the spelling of Medieval names is a result of the lack of spelling rules in the English language prior to the last few hundred years. Before that time, scribes spelled according to sound, often varying the spelling of name within a single document. Battles has appeared as Battle, Battell, Battel, Battaile, Battail and others.

Notable among the family at this time was Thomas Battle advisor to King Henry VIII; and Ralph Battell, D.D. (1649-1713), an English divine. Andrew Battel ( fl. 1589-1614), was an English traveller, born in Essex about 1565. "On 20 April 1589 he sailed with Captain Abraham Cocke for Rio de la Plata. After a troublesome voyage they reached the mouth of the river in the autumn, but were forced...
Another 67 words (5 lines of text) are included under the topic Early Battles Notables in all our PDF Extended History products and printed products wherever possible.

In the United States, the name Battles is the 3,905th most popular surname with an estimated 7,461 people with that name. [1]

Migration of the Battles family to Ireland

Some of the Battles family moved to Ireland, but this topic is not covered in this excerpt. More information about their life in Ireland is included in all our PDF Extended History products and printed products wherever possible.

Battles migration to the United States +

Battles Settlers in United States in the 17th Century

Battles Settlers in United States in the 19th Century