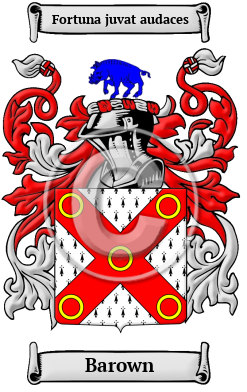 The name Barown is an occupational surname, deriving from word for the title of a Baron. The surname Barown was also applied as a nickname to a person with a regal or dignified bearing reminiscent of a baron. The Gaelic form of the name Barown is Barún.

Early Origins of the Barown family

The surname Barown was first found in County Waterford (Irish: Port Láirge), anciently the Deise region, on the South coast of Ireland in the Province of Munster, where they were granted lands by Strongbow, Earl of Pembroke, for their assistance on his invasion of Ireland.

Early History of the Barown family

During the lifetime of an individual person, his name was often spelt by church officials and medieval scribes the way it sounded. An examination of the many different origins of each name has revealed many spelling variations for the name: Barron, Baron, Barone, Barrone and others.

Notable amongst the family up to this time was Bonaventure Baron, O.F.M., (1610-1696), Irish Franciscan friar who was a noted theologian, philosopher, teacher and writer of Latin prose and verse; and his...
Another 31 words (2 lines of text) are included under the topic Early Barown Notables in all our PDF Extended History products and printed products wherever possible.

Migration of the Barown family

Irish immigration to North American began in the late 18th century as many Irish families desired to own their own land. This pattern of immigration grew slowly yet steadily until the 1840s. At that time, a failed crop and a growing population in Ireland resulted in the Great Potato Famine. Poverty, disease, and starvation ravaged the land. To ease their pain and suffering the Irish often looked upon North America as a solution: hundreds of thousands undertook the voyage. Their arrival meant the growth of industry and commerce for British North America and the United States. For the individual Irishman, it meant survival and hope, and the opportunity for work, freedom, and ownership of land. The early immigration and passenger lists revealed many bearing the name Barown: Ellis Barron who settled in Watertown in 1640 from Waterford; Robert Barron settled in Virginia in 1634; Elizeus Barron who settled in Woodbridge New Jersey in 1705.