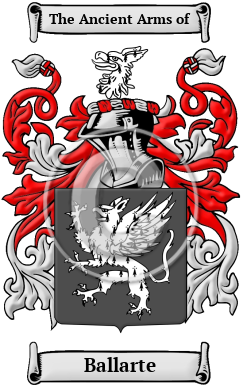 The name Ballarte was formed many centuries ago by the ancient Anglo-Saxon tribes of Britain. It was a name typically given to a person known for their lack of hair. As a point of interest, the name is derived from the Old English word ball-ard, which means a bald headed man. [1]

Early Origins of the Ballarte family

The surname Ballarte was first found in various counties and shire of England. Various sources claim different first records of the family. "Ballard is another old Kent name. The Ballards owned Sapinton manor from the time of Henry IV. until that of Philip and Mary. Robert Ballard, butler of Richard II., received from his Sovereign the manor of West Combe. In the reign of Henry VI., Thomas Ballard, of Horton Parva, was one of the sheriffs of Kent." [4]

Kirby's Quest notes that the earliest record of the name was temp. Edward III when Richard Balleheved and Petrr Ballard were listed there. [5] The Hundredorum Rolls of 1273 list: Alurell Balard in Essex, 1273; Dreu Ballard in Huntingdonshire; and Thomas Ballard in Somerset. [1]

Early History of the Ballarte family

Before English spelling was standardized a few hundred years ago, spelling variations of names were a common occurrence. Elements of Latin, French and other languages became incorporated into English through the Middle Ages, and name spellings changed even among the literate. The variations of the surname Ballarte include Ballard, Bellard, Bellhird, Belhyrd, Bellerd, Bellird, Belard, Balard, Ballird and many more.

Distinguished members of the family include John Ballard (d. 1586), English Roman Catholic priest who owes his fame solely to his connection with the Babington conspiracy; Colonel Thomas Ballard (1630-1689) English-born, early American...
Another 32 words (2 lines of text) are included under the topic Early Ballarte Notables in all our PDF Extended History products and printed products wherever possible.

Migration of the Ballarte family