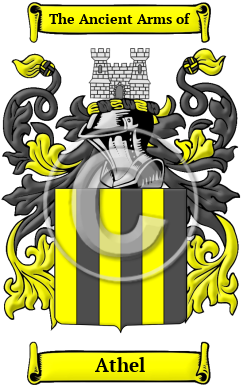 Early Origins of the Athel family

The surname Athel was first found in Perthshire (Gaelic: Siorrachd Pheairt) former county in the present day Council Area of Perth and Kinross, located in central Scotland, where they were anciently, recorded in the 8th century, seated in their territories. The Pictish influence on Scottish history diminished after Kenneth Macalpine became King of all Scotland. They were said to have been borne of seven sons of the King Cruithne. But those east coast families still played an important role in government and were more accessible to Government than their western highland counterparts. The family name became associated as a sept of the Clan Dukes of Atholl. Allegiances were important to Scottish middle age survival. Later they held a family seat at Glen Garry.

Early History of the Athel family

This web page shows only a small excerpt of our Athel research. Another 79 words (6 lines of text) covering the years 1291, 1592 and 1745 are included under the topic Early Athel History in all our PDF Extended History products and printed products wherever possible.

Spelling variations of this family name include: Atholl, Athol, Athole, Athetle, Athet and others.

Another 27 words (2 lines of text) are included under the topic Early Athel Notables in all our PDF Extended History products and printed products wherever possible.

Migration of the Athel family

Some of the first settlers of this family name or some of its variants were: Margaret Atholl who went to Pictou, Nova Scotia, as a Scottish emigrant in 1801. There is also a record of Francis Athole settling in Halifax, Nova Scotia in 1838..