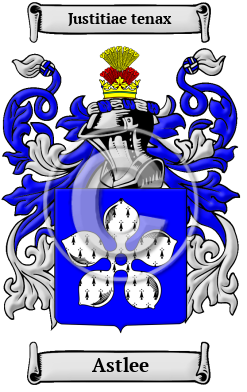 The present generation of the Astlee family is only the most recent to bear a name that dates back to the ancient Anglo-Saxon culture of Britain. Their name comes from having lived in Warwickshire, where they founded the town of Astley. The name is local; a transliteration of the name is east leigh, or east wood. [1]

Early Origins of the Astlee family

The surname Astlee was first found in Warwickshire at Astley, a village and parish within the North Warwickshire district. There are other locals through Britain, but this seems to be local from which the family are descended. The name can be "traced to Philip de Estlega in the 12th of Henry II, and in the female line from the Constables of Melton-Constable, which estate came into the family be the second marriage of Thomas Lord Astley with Edith, third sister and coheir of Geoffrey de Donstable, in the time of Henry II." [3]

Early History of the Astlee family

Until the dictionary, an invention of only the last few hundred years, the English language lacked any comprehensive system of spelling rules. Consequently, spelling variations in names are frequently found in early Anglo-Saxon and later Anglo-Norman documents. One person's name was often spelled several different ways over a lifetime. The recorded variations of Astlee include Astley, Astlee, Astlie, Astly and others.

Notables of this surname at this time include: Sir Jacob Astley, Lord Astley (1579-1652), English Royalist, the second son of Isaac Astley of Melton Constable, Norfolk. "During the first civil war Astley is a notable figure. He was among those 'hurt' at Edgehill (13 Oct. 1642.) He commanded a division at the siege of Gloucester. When Essex, after relieving that city, had fought the battle of Newbury (20 Sept. 1643), and had continued his retreat to London, Sir Jacob possessed himself of Reading. In 1644 he assisted Lord Hopton in the capture of Arundel (soon retaken by Waller), and shared in...
Another 145 words (10 lines of text) are included under the topic Early Astlee Notables in all our PDF Extended History products and printed products wherever possible.

Migration of the Astlee family

Thousands of English families boarded ships sailing to the New World in the hope of escaping the unrest found in England at this time. Although the search for opportunity and freedom from persecution abroad took the lives of many because of the cramped conditions and unsanitary nature of the vessels, the opportunity perceived in the growing colonies of North America beckoned. Many of the settlers who survived the journey went on to make important contributions to the transplanted cultures of their adopted countries. The Astlee were among these contributors, for they have been located in early North American records: Charles Astley who settled in New England in 1684; Henry Astley settled in Philadelphia in 1781; Christopher Astley settled in Newcastle, Del. in 1852..