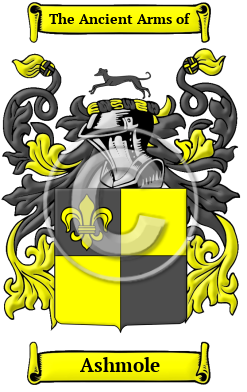 Early Origins of the Ashmole family

The surname Ashmole was first found in Staffordshire where they held a family seat as Lords of the Manor. One source claims the name is related to the name Ashmore as both hail from Wednesfield, Staffordshire. [1]

Early History of the Ashmole family

Until quite recently, the English language has lacked a definite system of spelling rules. Consequently, Anglo-Saxon surnames are characterized by a multitude of spelling variations. Changes in Anglo-Saxon names were influenced by the evolution of the English language, as it incorporated elements of French, Latin, and other languages. Although Medieval scribes and church officials recorded names as they sounded, so it is common to find one person referred to by several different spellings of his surname, even the most literate people varied the spelling of their own names. Variations of the name Ashmole include Ashmole, Ashmoal, Ashmoll, Ashmull, Ashmall and others.

Distinguished members of the family include Elias Ashmole (1617-1692), an English antiquary, politician, officer of arms, astrologer and student of alchemy. He was a Royalist during the English Civil War, and after the Restoration, he was appointed to the College of Arms as Windsor Herald of Arms in Ordinary in June 1660. Upon his death, his antiquarian library and priceless manuscripts were donated to the University of Oxford to create the Ashmolean Museum. He was born at Lichfield 23 May 1617, where his father "though following the trade of a saddler, was a man of good family who had seen much...
Another 191 words (14 lines of text) are included under the topic Early Ashmole Notables in all our PDF Extended History products and printed products wherever possible.

Migration of the Ashmole family