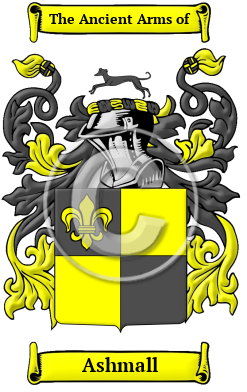 Early Origins of the Ashmall family

The surname Ashmall was first found in Staffordshire where they held a family seat as Lords of the Manor. One source claims the name is related to the name Ashmore as both hail from Wednesfield, Staffordshire. [1]

Early History of the Ashmall family

It is only in the last few hundred years that the English language has been standardized. For that reason, early Anglo-Saxon surnames like Ashmall are characterized by many spelling variations. As the English language changed and incorporated elements of other European languages, even literate people changed the spelling of their names. Scribes and monks in the Middle Ages spelled names they sounded, so it is common to find several variations that refer to a single person. The variations of the name Ashmall include: Ashmole, Ashmoal, Ashmoll, Ashmull, Ashmall and others.

Distinguished members of the family include Elias Ashmole (1617-1692), an English antiquary, politician, officer of arms, astrologer and student of alchemy. He was a Royalist during the English Civil War, and after the Restoration, he was appointed to the College of Arms as Windsor Herald of Arms in Ordinary in June 1660. Upon his death, his antiquarian library and priceless manuscripts were donated to the University of Oxford to create the Ashmolean Museum. He was born at Lichfield 23 May 1617, where his father "though following the trade of a saddler, was a man of good family who had seen much...
Another 191 words (14 lines of text) are included under the topic Early Ashmall Notables in all our PDF Extended History products and printed products wherever possible.

Migration of the Ashmall family