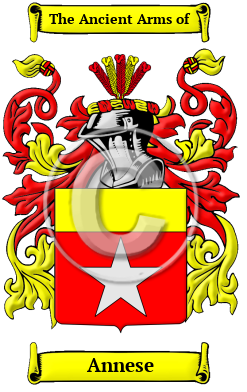 The Annese name is an important part of the history of the ancient Anglo-Saxon tribes of Britain. Annese is derived from the personal name Agnes, which itself is derived from the Greek name Hagne, which means pure and holy. The name was also used in the Latin phrase Agnus Dei, which means lamb of God. The personal name Agnes was popularized by devotees, the early Christian martyr, Saint Agnes. [1]

Early Origins of the Annese family

The surname Annese was first found in the Hundredorum Rolls of 1273 where the name was found as a forename and surname: Robert filius Harneis, Lincolnshire; John filius Hernici, Lincolnshire; Roger Herneys, Norfolk; John Harneys, Cambridgeshire; and Heme' de Stano, Suffolk. [3]

Early History of the Annese family

Before the last few hundred years, the English language had no fast system of spelling rules. For that reason, spelling variations are commonly found in early Anglo-Saxon surnames. Over the years, many variations of the name Annese were recorded, including Anniss, Anness, Arness, Annison, Arnison, Annes, Ennis and many more.

Notables of the family at this time include Dom João Anes (João Eanes), died 1402, bishop (since 1384), first archbishop of Lisbon; Annis of Nottingham. William Harness (1790-1869), was the author of a 'Life of Shakespeare,' born near Wickham in Hampshire on 14 March 1790, was son of John Harness, M.D., commissioner of transports, and elder brother of Sir Henry Drury Harness. [4] Sir Henry Drury Harness (1804-1883), the British general, colonel-commandant royal engineers, son of John Harness, Esq., M.D., Commissioner of the Transport Board, was born in 1804. Harness passed high out of the Royal Military Academy at Woolwich in 1825, but...
Another 149 words (11 lines of text) are included under the topic Early Annese Notables in all our PDF Extended History products and printed products wherever possible.

Migration of the Annese family to Ireland

Some of the Annese family moved to Ireland, but this topic is not covered in this excerpt.
Another 45 words (3 lines of text) about their life in Ireland is included in all our PDF Extended History products and printed products wherever possible.

Migration of the Annese family

To escape oppression and starvation at that time, many English families left for the "open frontiers" of the New World with all its perceived opportunities. In droves people migrated to the many British colonies, those in North America in particular, paying high rates for passages in cramped, unsafe ships. Although many of the settlers did not make the long passage alive, those who did see the shores of North America perceived great opportunities before them. Many of the families that came from England went on to make essential contributions to the emerging nations of Canada and the United States. Research into various historical records revealed some of first members of the Annese family emigrate to North America: William Annis, who settled in Virginia in 1639; Thomas Anniss, aged 23, who settled there in 1683; as well as William Arness, who arrived at Philadelphia, Pennsylvania, in 1685..