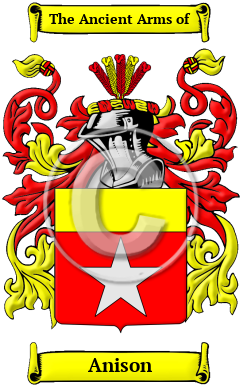 The generations and branches of the Anison family share a name that has its roots in the ancient Anglo-Saxon culture of Britain. The name Anison comes from the personal name Agnes, which itself is derived from the Greek name Hagne, which means pure and holy. The name was also used in the Latin phrase Agnus Dei, which means lamb of God. The personal name Agnes was popularized by devotees, the early Christian martyr, Saint Agnes. [1]

Early Origins of the Anison family

The surname Anison was first found in the Hundredorum Rolls of 1273 where the name was found as a forename and surname: Robert filius Harneis, Lincolnshire; John filius Hernici, Lincolnshire; Roger Herneys, Norfolk; John Harneys, Cambridgeshire; and Heme' de Stano, Suffolk. [3]

Early History of the Anison family

Until quite recently, the English language has lacked a definite system of spelling rules. Consequently, Anglo-Saxon surnames are characterized by a multitude of spelling variations. Changes in Anglo-Saxon names were influenced by the evolution of the English language, as it incorporated elements of French, Latin, and other languages. Although Medieval scribes and church officials recorded names as they sounded, so it is common to find one person referred to by several different spellings of his surname, even the most literate people varied the spelling of their own names. Variations of the name Anison include Anniss, Anness, Arness, Annison, Arnison, Annes, Ennis and many more.

Notables of the family at this time include Dom João Anes (João Eanes), died 1402, bishop (since 1384), first archbishop of Lisbon; Annis of Nottingham. William Harness (1790-1869), was the author of a 'Life of Shakespeare,' born near Wickham in Hampshire on 14 March 1790, was son of John Harness, M.D., commissioner of transports, and elder brother of Sir Henry Drury Harness. [4] Sir Henry Drury Harness (1804-1883), the British general, colonel-commandant royal engineers, son of John Harness, Esq., M.D., Commissioner of the Transport Board, was born in 1804. Harness passed high out of the Royal Military Academy at Woolwich in 1825, but...
Another 149 words (11 lines of text) are included under the topic Early Anison Notables in all our PDF Extended History products and printed products wherever possible.

Migration of the Anison family to Ireland

Some of the Anison family moved to Ireland, but this topic is not covered in this excerpt.
Another 45 words (3 lines of text) about their life in Ireland is included in all our PDF Extended History products and printed products wherever possible.

Migration of the Anison family

Searching for a better life, many English families migrated to British colonies. Unfortunately, the majority of them traveled under extremely harsh conditions: overcrowding on the ships caused the majority of the immigrants to arrive diseased, famished, and destitute from the long journey across the ocean. For those families that arrived safely, modest prosperity was attainable, and many went on to make invaluable contributions to the development of the cultures of the new colonies. Research into the origins of individual families in North America revealed records of the immigration of a number of people bearing the name Anison or a variant listed above: William Annis, who settled in Virginia in 1639; Thomas Anniss, aged 23, who settled there in 1683; as well as William Arness, who arrived at Philadelphia, Pennsylvania, in 1685..