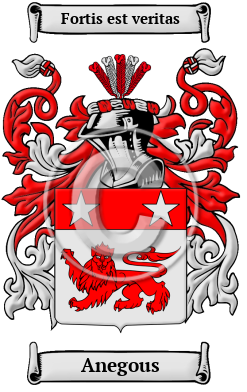 When Anegous was first used as a surname among the ancient Scottish people, it was a name for a person with great strength. The surname Anegous was originally derived from the Gaelic word Aengus.

Early Origins of the Anegous family

The surname Anegous was first found in Fife, where one of the first records of the name was Serlo de Anegus who witnessed a composition anent the tithes of Strathylif in 1229. Other early records include: Eva de Anegos of the county of Forfare who rendered homage in 1296 to King Edward I of England when he briefly conquered Scotland; William de Anegus who was a Scottish prisoner taken at Dunbar Castle in 1297; and Edward de Anegous and Laurence of Angus who were Scottish prisoners taken in the capture of Stirling Castle in 1305. "Michael of Angous, a Scotsman, in 1358, 'was foremost at the last capture of the town of Berwick by the Scots, and leapt over the walls the night it was taken' " [1]

Early History of the Anegous family

The arts of spelling and translation were yet in their infancies when surnames began, so there are an enormous number of spelling variations of the names in early Scottish records. This is a particular problem with Scottish names because of the numerous times a name might have been loosely translated to English from Gaelic and back. Anegous has been spelled Angus, Anguish, Anguis, Angos, Angas, Anegous, Anegos, Enguish and many more.

More information is included under the topic Early Anegous Notables in all our PDF Extended History products and printed products wherever possible.

Migration of the Anegous family to Ireland

Some of the Anegous family moved to Ireland, but this topic is not covered in this excerpt.
Another 59 words (4 lines of text) about their life in Ireland is included in all our PDF Extended History products and printed products wherever possible.

Migration of the Anegous family

This oppression forced many Scots to leave their homelands. Most of these chose North America as their destination. Although the journey left many sick and poor, these immigrants were welcomed the hardy with great opportunity. Many of these settlers stood up for their newfound freedom in the American War of Independence. More recently, Scots abroad have recovered much of their collective heritage through highland games and other patriotic functions and groups. An examination of passenger and immigration lists has located various settlers bearing the name Anegous: William Angus who came to Norfolk, Virginia in 1774; Daniel, Robert, William and John who all arrived in New York in 1775; Robert Angus who settled in New York in 1776.