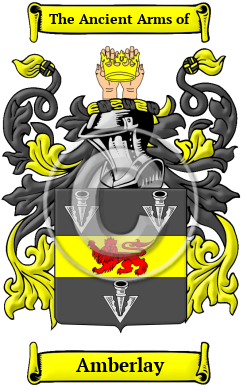 Amberlay is an ancient Norman name that arrived in England after the Norman Conquest of 1066. It is a name for a person employed as an enameller, and derives from the Anglo-Norman-French amayler, of the same meaning. [1]

It is also possible that the name refers to one who is employed in a profession which involves horses, as the Old English ambler means walker, and is a technical word for the slowest gait of a horse. [2] "The surname may mean ‘keeper of the stable’" [1]

Their ancient estates were in Amblie, in Calvados in Normandy. [3]

Early Origins of the Amberlay family

The surname Amberlay was first found in Yorkshire where Nicholas le Aumbleour was recorded in 1307. Alexander Ambler was a Freeman of York in 1474. London records show William le Amayler there in 1303 and Robert Ambeler in 1375. Later, Simon le Amelous was listed in Somerset in 1344. [1]

The Hundredorum Rolls of 1273 included Thomas le Amblur, but no county was provided. [4]

"Ambler is an old Yorkshire name, now best represented in the West Riding, There were several of the name in Arnley about a century ago. William Ambler was mayor of Doucaster in 171, and one of the sheriffs of York in 1727 bore this name. In 1665, Captain Thomas Ambler gave £30 to the poor of Leeds. Ombler was the name of the mayor of Holderness, in the East Riding, in 1618, 1638, 1655, and 1821. The name occurred amongst the yeomen of East Hasterton in the reign of Edward VI. (D.); and going much further back we find Amblurs in the East Riding and in Lincolnshire in the reign of Edward I." [5]

Early History of the Amberlay family

This web page shows only a small excerpt of our Amberlay research. Another 122 words (9 lines of text) covering the years 1100, 1166 and 1924 are included under the topic Early Amberlay History in all our PDF Extended History products and printed products wherever possible.

Before the last few hundred years the English language had no fixed system of spelling rules. For that reason, spelling variations occurred commonly in Anglo Norman surnames. Over the years, many variations of the name Amberlay were recorded, including Ambler, Ambeller, Amblie, Anbler, Amble, Amblor and others.

More information is included under the topic Early Amberlay Notables in all our PDF Extended History products and printed products wherever possible.

Migration of the Amberlay family

The unstable environment in England at this time caused numerous families to board ships and leave in search of opportunity and freedom from persecution abroad in places like Ireland, Australia, and particularly the New World. The voyage was extremely difficult, however, and only taken at great expense. The cramped conditions and unsanitary nature of the vessels caused many to arrive diseased and starving, not to mention destitute from the enormous cost. Still opportunity in the emerging nations of Canada and the United States was far greater than at home and many went on to make important contributions to the cultures of their adopted countries. An examination of many early immigration records reveals that people bearing the name Amberlay arrived in North America very early: Martha Ambler who settled in Virginia in 1721; John Ambler settled in Virginia in 1721; Benjamin in New York State, in 1774; with his wife, Mary, son John, and Ann, his daughter..