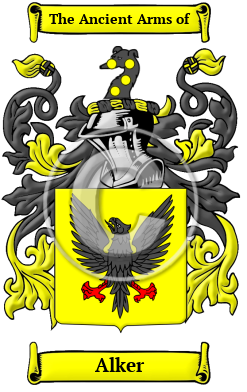 The ancient and distinguished surname Alker is of two distinct origins. It is believed that the name was originally derived from the Old English word "ealdgar," meaning "noble spear." Alternatively, in some instances, the name signifies "of Altcar," a village near Ormskirk in Lancashire. [1]

Early Origins of the Alker family

The surname Alker was first found in Norfolk, where William Alker was listed in the Pipe Rolls of 1212. In this instance, the name is probably derived from the Old English "ealdgar," making it likely that this branch of the family is of Anglo-Saxon descent. William de Altekar was recorded in the "Calendar of Letter Books" of London in 1341; the preposition "de," as well as the spelling of the name, indicates that this branch of the family hailed from Altcar in Lancashire. [2] It is likely that the family estate of this branch was still located in Altcar (Great Altcar), Lancashire at this time. "This place seems to be the Acrer of the Domesday Survey, at which period it was held by Uctred; it was afterwards held by the abbots of Merivale, and continued with them till the Dissolution. The parish takes its name from the river Alt, and the word car, meaning low land. " [3] So as far as the origin of the place name is concerned there is some doubt, but there is no doubt that many of the family originated in West Lancashire.

Early History of the Alker family

This web page shows only a small excerpt of our Alker research. Another 78 words (6 lines of text) covering the years 1549 and 1866 are included under the topic Early Alker History in all our PDF Extended History products and printed products wherever possible.

The English language only became standardized in the last few centuries; therefore,spelling variations are common among early Anglo-Saxon names. As the form of the English language changed, even the spelling of literate people's names evolved. Alker has been recorded under many different variations, including Alker, Alkar, Altcar, Alkire, Alger, Algar, Allgar, Allger, Allker and many more.

More information is included under the topic Early Alker Notables in all our PDF Extended History products and printed products wherever possible.

Migration of the Alker family

For many English families, the political and religious disarray that shrouded England made the far away New World an attractive prospect. On cramped disease-ridden ships, thousands migrated to those British colonies that would eventually become Canada and the United States. Those hardy settlers that survived the journey often went on to make important contributions to the emerging nations in which they landed. Analysis of immigration records indicates that some of the first North American immigrants bore the name Alker or a variant listed above: Andrew Alger and Thomas Allgar, who both settled in New England in 1632; Arthur Algar, who came to Virginia in 1731; James Alger, who arrived in Rhode Island in 1768.