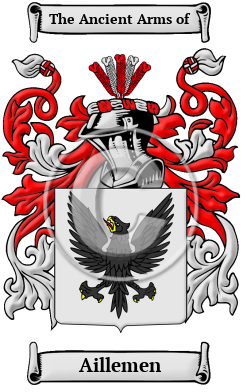 The Aillemen family's name is derived from the ancient Norman culture that was established in Britain following the Norman Conquest of island in 1066. Their name originated with an early member who was a person or family of German heritage. Further research showed the name was derived from the Anglo-Norman-French word aleman, which means German. [1]

Early Origins of the Aillemen family

The surname Aillemen was first found in Allemagne, [2] now known as Fleury-sur-Orne, near Caen in Normandy. There is no clear record of the family arriving in Britain but their voyage is of no doubt. Some of the first records of the name include listings in the Hundredorum Rolls of 1273: Terric le Alemaund in Buckinghamshire; Henry de Alemania in Nottinghamshire; Bertram de Almannia in Lincolnshire and Robert Almene in Cambridgeshire. [3] John le Alemaund was listed in London in 1284. [4] The Yorkshire Poll Tax Rolls of 1379 list Willelmus Alman. [3]

Early History of the Aillemen family

This web page shows only a small excerpt of our Aillemen research. Another 82 words (6 lines of text) covering the years 1304, 1440, 1407 and 1800 are included under the topic Early Aillemen History in all our PDF Extended History products and printed products wherever possible.

Spelling variations of forenames and surnames were common. Originally all records were in Latin and translating a record, whether it was a surname or village name was dependent on a verbal translation into the language of the times. Languages evolved too and that complicated entries. Spellings often changed in a person’s lifetime in various rolls (censuses) of the time. Many variations of the name Aillemen have been found, including Almayne, Alman, Allman, Almand, Hallman, Allmaine, Almon, Almand, Altman, Allman, Ellman, Dalman and many more.

Outstanding amongst the family at this time was Thomas Elmham (d. 1440?), English historian, Benedictine monk of St. Augustine's, Canterbury, probably a native of North Elmham in Norfolk. He was treasurer of his society...
Another 34 words (2 lines of text) are included under the topic Early Aillemen Notables in all our PDF Extended History products and printed products wherever possible.

Migration of the Aillemen family to Ireland

Some of the Aillemen family moved to Ireland, but this topic is not covered in this excerpt.
Another 53 words (4 lines of text) about their life in Ireland is included in all our PDF Extended History products and printed products wherever possible.

Migration of the Aillemen family

For many English families, the social climate in England was oppressive and lacked opportunity for change. For such families, the shores of Ireland, Australia, and the New World beckoned. They left their homeland at great expense in ships that were overcrowded and full of disease. Many arrived after the long voyage sick, starving, and without a penny. But even those were greeted with greater opportunity than they could have experienced back home. Numerous English settlers who arrived in the United States and Canada at this time went on to make important contributions to the developing cultures of those countries. Many of those families went on to make significant contributions to the rapidly developing colonies in which they settled. Early North American records indicate many people bearing the name Aillemen were among those contributors: John Allman who settled in Philadelphia in 1764; Simon Alman in 1709; Stephen Almand in 1749; H. Almand in Norfolk, Virginia, in 1820.