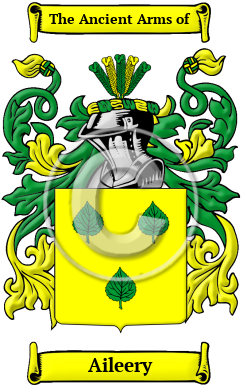 The name Aileery originally appeared in Gaelic as O Cleirigh, from the word "cleireach," which means "clerk" or "cleric." The name denotes a descendant of Cleireach, who was born around 820 AD, and descended from Guaire the Hospitable, the famous king of Connacht.

Early Origins of the Aileery family

The surname Aileery was first found in County Galway. A descendent of Guaire, Cleireach, the namesake of the O'Clerys, was born around 820 AD, about two hundred years before hereditary surnames came into general use. [1] However, the name O'Clery first appeared around 950 AD, making it one of the earliest recorded hereditary surnames. The O'Clerys were the dominant sept in what is now the diocese of Kilmacduagh in the county of Galway, but declined in power until they were forced out of their original territory by the mid-13th century. The most important branch of the family settled in Counties Derry and Donegal and became prominent historians and poets. The branch that settled in County Cavan has seemingly all but vanished. However, the English surname Clarke has been widely substituted for O'Clery there, following the Plantation of Ulster, and many Irish Clarkes may actually be O'Clerys, rather than descendants of English settlers. Another branch is still fairly common in the counties of Kilkenny, Waterford, and Tipperary. The name is presently found mostly in Munster and Dublin.

Early History of the Aileery family

Official documents, crafted by early scribes and church officials, primarily contained names that were spelled according to their pronunciation. This lead to the problem of one name being recorded under several different variations, creating an illusion that a single person was many people. Among the many spelling variations of the surname Aileery that are preserved in the archival documents of the time are Clery, Cleary, Claree, Clarey, Cleare, Clearey, Clerey, O'Cleary, O'Clery, Macchlery, Clerkin, Clark and many more.

Another 42 words (3 lines of text) are included under the topic Early Aileery Notables in all our PDF Extended History products and printed products wherever possible.

Migration of the Aileery family

Irish families fled the English-colonized Ireland in record numbers during the 19th century for North America. Many of those destitute families died from disease during, and even shortly after, the long journey. Although those that immigrated before the Great Potato Famine of the 1840s often were granted a tract of land, those that arrived later were generally accommodated in urban centers or in work camps. Those in the urban centers would labor in the manufacturing sector, whereas those in work camps would to build critical infrastructures such as bridges, canals, roads, and railways. Regardless of when these Irish immigrants came to North America, they were critical for the rapid development of the young nations of the United States and Canada. Early immigration and passenger lists have recorded many early immigrants bearing the name of Aileery: Thomas Clary, who arrived in the Virginia colony in 1642; George Cleary, who was on record in Barbados plantation between the years 1679 and 1680; Darby Cleary, who came to America in 1736.