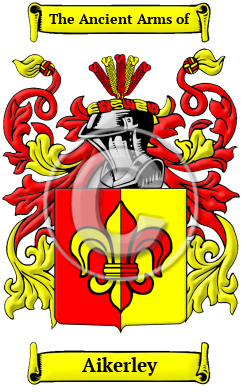 Early Origins of the Aikerley family

The surname Aikerley was first found in Buckinghamshire, where they held a family seat from ancient times. The name literally mane "dweller at the Acre-Lea, i.e., a common field divided into plots of various sizes. [Middle English aker, Old English aecer, a division of land +M.E. ley, Old English leah, a lea, field]." [1]

Early History of the Aikerley family

Aikerley has been spelled many different ways. Before English spelling became standardized over the last few hundred years, spelling variations in names were a common occurrence. As the English language changed in the Middle Ages, absorbing pieces of Latin and French, as well as other languages, the spelling of people's names also changed considerably, even over a single lifetime. Many variations of the name Aikerley have been found, including Ackerly, Ackerley, Acerly, Akerley, Akeley, Acle, Ackle, Acley, Acly and many more.

Distinguished members of the family include Roger Acherley (1665?-1740), Welsh lawyer, constitutional writer, and politician, the son and heir of John Acherley of Stanwardine, or Stottesden, Shropshire, where he was the representative of a long-established family. Roger was admitted a student of the Inner Temple on 6 March 1685, and called to the bar on 24 May 1691. For some years Acherley was engaged in disputing the will of Thomas Vernon, who died in 1721, by...
Another 76 words (5 lines of text) are included under the topic Early Aikerley Notables in all our PDF Extended History products and printed products wherever possible.

Migration of the Aikerley family

In an attempt to escape the chaos experienced in England, many English families boarded overcrowded and diseased ships sailing for the shores of North America and other British colonies. Those families hardy enough, and lucky enough, to make the passage intact were rewarded with land and a social environment less prone to religious and political persecution. Many of these families became important contributors to the young colonies in which they settled. Early immigration and passenger lists have documented some of the first Aikerleys to arrive on North American shores: Henry Ackerly, who sailed to New Haven, Connecticut in 1640. Nicholas Ackley sailed to Connecticut in 1655; and Joseph Ackerly to Philadelphia in 1865. Henry Akerly arrived in New Haven, Conn in 1640. Robert Akerly arrived in Rhode Island in 1651..