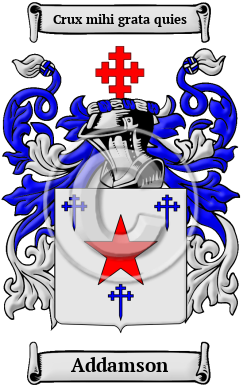 Early Origins of the Addamson family

The surname Addamson was first found in Angus, where one of the first records of the name was "Adam filius Ade filius Philippi [who] was burgess of Suhtberewick in 1261. " [1] John Adamson of the same county took an oath of fealty in 1296.

Early History of the Addamson family

This web page shows only a small excerpt of our Addamson research. Another 89 words (6 lines of text) covering the years 1261, 1296, 1587, 1433, 1581 and 1639 are included under the topic Early Addamson History in all our PDF Extended History products and printed products wherever possible.

Spelling variations of this family name include: Adamsone, Addamson, Adamson and others.

Another 33 words (2 lines of text) are included under the topic Early Addamson Notables in all our PDF Extended History products and printed products wherever possible.

Migration of the Addamson family to Ireland

Some of the Addamson family moved to Ireland, but this topic is not covered in this excerpt.
Another 60 words (4 lines of text) about their life in Ireland is included in all our PDF Extended History products and printed products wherever possible.

Addamson Settlers in West Indies in the 17th Century