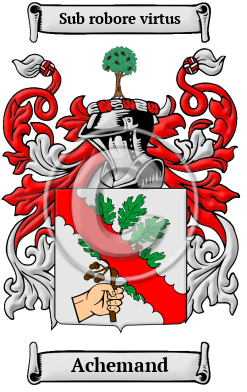 In Scottish history, few names go farther back than Achemand, whose ancestors lived among the clans of the Pictish tribe. They lived in Lanarkshire. But the origins of the Achemand surname are still unclear. Some suggest that the name came from the Old English Aecemann, meaning "oak-man." Family lore has it that an officer commanding troops besieging Macbeth in Dunsinan Castle ordered his men to march in attack with branches of oak; the officer then became known as the "oak-man." [1]

Early Origins of the Achemand family

The surname Achemand was first found in the counties of Fifeshire and Forfarshire, in Scotland. It is said that Akeman commanded MacBeth's troops in the siege of Dunsinane Castle and ordered the attack in 1057. One of the earliest records for the name was Alisaundre Akeman who swore an oath of allegiance to King Edward I in 1296. "The tombs of ten John Aikmans are said to be in Arbroath Abbey." [1]

Early History of the Achemand family

This web page shows only a small excerpt of our Achemand research. Another 60 words (4 lines of text) covering the years 1575, 1682, 1731 and 1707 are included under the topic Early Achemand History in all our PDF Extended History products and printed products wherever possible.

The arts of spelling and translation were yet in their infancies when surnames began, so there are an enormous number of spelling variations of the names in early Scottish records. This is a particular problem with Scottish names because of the numerous times a name might have been loosely translated to English from Gaelic and back. Achemand has been spelled Aikman, Akeman, Aichman, Aykman, Akman, Hekman and others.

Notable amongst the Clan at this time was William Aikman (1682-1731), Scottish portrait painter, born at Caerney, Forfarshire. "He was the only son of William Aikman, advocate, sheriff of Forfarshire, and a man of eminence at the Scottish...
Another 37 words (3 lines of text) are included under the topic Early Achemand Notables in all our PDF Extended History products and printed products wherever possible.

Migration of the Achemand family

This oppression forced many Scots to leave their homelands. Most of these chose North America as their destination. Although the journey left many sick and poor, these immigrants were welcomed the hardy with great opportunity. Many of these settlers stood up for their newfound freedom in the American War of Independence. More recently, Scots abroad have recovered much of their collective heritage through highland games and other patriotic functions and groups. An examination of passenger and immigration lists has located various settlers bearing the name Achemand: Francis Aikman, who came to Virginia in 1669; Patrick Aikman, who came to Boston in 1715; William Aikman, who arrived in Boston in 1718; Ernest Akman who settled in Philadelphia, Pennsylvania in 1750.