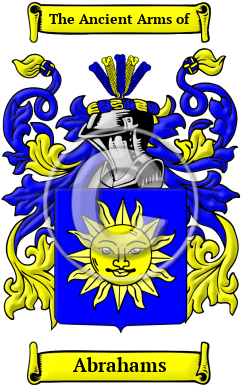 Early Origins of the Abrahams family

The surname Abrahams was first found in Balfeth, in Scotland, in 1163, where Adam Abraham, Bishop of Dunblain, held extensive lands. Further south in Lancashire, the township of Abram was home to another branch of the family. "This township was originally called Adburgham, and afterwards Abraham, and gave name to an ancient family of landowners, of whom Gilbert de Abram and John Abraham are mentioned in the reigns of Henry IV. and Henry V. There are some ancient seats, among which is Abram Hall, a moated brick mansion existing since the time of Henry VI." [1]

Early History of the Abrahams family

This web page shows only a small excerpt of our Abrahams research. Another 108 words (8 lines of text) covering the years 1672, 1689, 1672 and are included under the topic Early Abrahams History in all our PDF Extended History products and printed products wherever possible.

When the first dictionaries were invented in the last few hundred years, spelling gradually became standardized. Before that time, scribes spelled according to sound. Names were often recorded under different spelling variations every time they were written. Abrahams has been written Abraham, Abram, Abrams, Abrahams and others.

Another 44 words (3 lines of text) are included under the topic Early Abrahams Notables in all our PDF Extended History products and printed products wherever possible.

Migration of the Abrahams family to Ireland

Some of the Abrahams family moved to Ireland, but this topic is not covered in this excerpt.
Another 82 words (6 lines of text) about their life in Ireland is included in all our PDF Extended History products and printed products wherever possible.

Abrahams migration to the United States +

The crossing to North America did not seem so great in comparison with the hardships many Scots endured at home. It was long, expensive, and cramped, but also rewarding. North America offered land and the chance for settlers to prove themselves in a new place. And many did prove themselves as they fought to forge a new nation in the American War of Independence. The ancestors of those Scots can now experience much of their once-lost heritage through the Clan societies and highland games that have sprung up across North America in the last century. A search of immigration and passenger lists revealed many important, early immigrants to North America bearing the name of Abrahams:

Abrahams Settlers in United States in the 17th Century

Abrahams Settlers in United States in the 19th Century

Abrahams Settlers in Canada in the 18th Century

Abrahams Settlers in Australia in the 19th Century

Abrahams Settlers in New Zealand in the 19th Century

Abrahams Settlers in West Indies in the 18th Century

Historic Events for the Abrahams family +