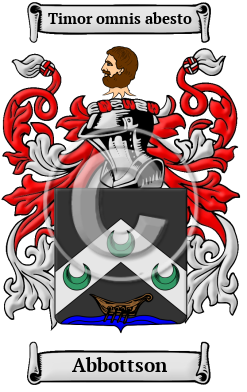 The ancestors of the name Abbottson are thought to have come from the ancient Scottish kingdom of Dalriada. Abbottson was used to indicate someone who worked as a son of an abbot. The Gaelic form of the name is Mac an Aba. They are descended from the hereditary abbots of St. Fillan's near Loch Earn. Fillan was a royal prince of the royal house of Dalriada. In the reign of William, the Lyon of Scotland, the Abbots of Glendochart held a rank equivalent to the Earls of Atholl and Menteith. The Clan held the barony of Glendochart at the west end of Loch Tay.

Early Origins of the Abbottson family

The surname Abbottson was first found in Perthshire (Gaelic: Siorrachd Pheairt) former county in the present day Council Area of Perth and Kinross, located in central Scotland, where they joined with the MacDougalls in opposing Robert the Bruce and consequently lost many of the vast territories they had held. However, the Chief of the MacNabs finally became reconciled to the Bruce, and regained many of his lost lands when King David II came to the throne of Scotland. He also received the official charter for the barony of Bowaine dated 1336. Finlay MacNab, the 4th Chief of the Clan, added considerably to the estates toward the end of the 15th century, but in 1552 another Finlay, the 6th Chief, fell into financial difficulties and mortgaged most of the Clan lands to the Campbell of Glenorchy. The Clan, however, refused to acknowledge the superiority of the Campbells

Early History of the Abbottson family

In the Middle Ages, the translation between Gaelic and English was not a highly developed process. Spelling was not yet standardized, and so, an enormous number of spelling variations appear in records of early Scottish names. Abbottson has appeared as MacNab, MacNabb, MacKnab, Mac an Aba (Gaelic) and others.

More information is included under the topic Early Abbottson Notables in all our PDF Extended History products and printed products wherever possible.

Migration of the Abbottson family to Ireland

Some of the Abbottson family moved to Ireland, but this topic is not covered in this excerpt.
Another 57 words (4 lines of text) about their life in Ireland is included in all our PDF Extended History products and printed products wherever possible.

Migration of the Abbottson family

Many of the ancestors of Dalriadan families who arrived in North America still live in communities along the east coast of Canada and the United States. In the American War of Independence many of the original settlers traveled north to Canada as United Empire Loyalists. In the late 19th and early 20th centuries the ancestors of many Scots began recovering their collective national heritage through Clan societies, highland games, and other patriotic events. Research into the origins of individual families in North America revealed records of the immigration of a number of people bearing the name Abbottson or a variant listed above: Alexander, Thomas and John MacNabb settled in Jamaica in 1716; Daniel, John, Patrick and Samuel McNabb all arrived in Philadelphia between 1840 and 1860..