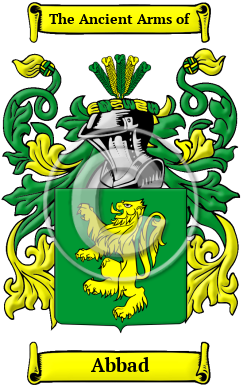 Abbad is an occupational surname for a person who was employed in an Abbot. "Abad" comes from the latin "abbas" and this from the Syrian "abba" meaning "padre" or father. This was the title given to those who had monasteries. [1]

This noble surname that can be traced back to medieval Spain. While the patronymic and metronymic surnames, which are derived from the name of the father and mother respectively, are the most common form of a hereditary surname in Spain, occupational surnames also emerged during the late Middle Ages. Many people, such as the Abbad family, adopted the name of their occupation as their surname. However, an occupational name did not become a hereditary surname until the office or type of employment became hereditary. The surname Abbad was an occupational name for a person who worked under the supervision of monks in an Abbot.

Early Origins of the Abbad family

The surname Abbad was first found in the Basque region of northern Spain. Abadía, named after the town's proximity to an abandoned abbey in the next town, is a small municipality found in the province of Cáceres. The surname Abbad is borne by a noble and very ancient lineage of Vizcaya (Basque Country), in the northern part of Spain. The ancestral seat of this family was located in the Gordejuela Valley.

Early History of the Abbad family

This web page shows only a small excerpt of our Abbad research. Another 215 words (15 lines of text) covering the years 1288, 1565, 1898, 1751, 1825 and 1827 are included under the topic Early Abbad History in all our PDF Extended History products and printed products wherever possible.

Prominent among bearers of the family name at this time was Manuel Abad y Queipo (1751-1825), a Spanish Roman Catholic Bishop of Michoacán in the Viceroyalty of New Spain at the time of the Mexican War...
Another 35 words (2 lines of text) are included under the topic Early Abbad Notables in all our PDF Extended History products and printed products wherever possible.

Migration of the Abbad family

Some of the first settlers of this family name or some of its variants were: Domingo Abad de Zurbano, who sailed to America in 1517; Miguel Abad sailed to the Spanish Main in 1534; and Martín Abad sailed to Peru in 1583. Later migrants included Marí.