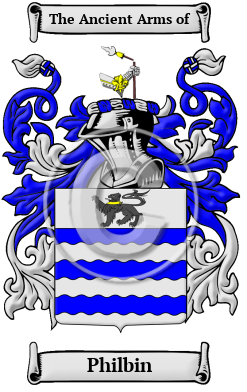 The Philbin surname in Ireland derives from several sources, but there was certainly a native Gaelic name which evolved into such names as MacPhilbin and MacPhillips.

Early Origins of the Philbin family

The surname Philbin was first found in Connacht (Irish: Connachta, (land of the) descendants of Conn), where historian O'Donovan, in the Annals of the Four Masters (1355) lists MacPhilbin as one of the chiefs of the district then known as Sil Anmachada in east Galway.

Early History of the Philbin family

This web page shows only a small excerpt of our Philbin research. Another 90 words (6 lines of text) covering the years 1585, 1635, 1786, 1787, and 1859 are included under the topic Early Philbin History in all our PDF Extended History products and printed products wherever possible.

Another 36 words (3 lines of text) are included under the topic Early Philbin Notables in all our PDF Extended History products and printed products wherever possible.

Philbin migration to the United States +

Philbin Settlers in United States in the 19th Century

Philbin Settlers in New Zealand in the 19th Century

Historic Events for the Philbin family +