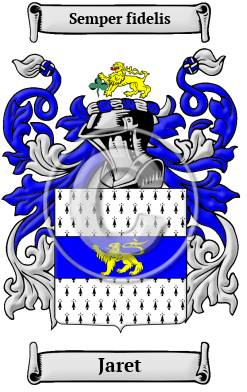 Although the Jaret surname came to Britain with the Normans, it derives from the Germanic personal names Gerard, or Gerald, composed of the elements "gar," or "ger," meaning "spear," "hard," meaning "brave," or "strong," and "wald," meaning "rule." The Anglo-Norman surname Jaret in Ireland was often Mac Gerailt, and was used as a synonym of Fitzgerald.

Early Origins of the Jaret family

The surname Jaret was first found in County Carlow (Irish: Cheatharlach) a small landlocked area located in the province of Leinster in the South East of Ireland, where some of the name may have come from Anglicized versions of MacOrcachta, believed to be descended from Cathal, brother of Teige Mor, of the powerful O'Connors of Connacht. However, it is thought that the majority of this name in Ireland are of English (Norman) stock.

Early History of the Jaret family

This web page shows only a small excerpt of our Jaret research. Another 27 words (2 lines of text) covering the year 1598 is included under the topic Early Jaret History in all our PDF Extended History products and printed products wherever possible.

In the days before Gaelic or English gained any significant semblance of standardization, the scribes who created documents simply recorded names as they sounded. Consequently, in the Middle Ages many people were recorded under different spellings each time their name was written down. Research on the Jaret family name revealed numerous spelling variations, including Garrett, Garratt, MacGarrett, McGarraty, Garret, Garrat, Garet, Garitt, Garatt and many more.

More information is included under the topic Early Jaret Notables in all our PDF Extended History products and printed products wherever possible.

Jaret migration to the United States +

Many Irish families left the English-controlled Ireland in the 19th century. Early immigrants were primarily after land and the opportunity of living a life entirely of their own fashioning. In the 1840s, this pattern of immigration changed as the Great Potato Famine struck Ireland. Hundreds of thousands left the diseased and starving island with little expectations but many hopes. By this time there was very little available land in the east, so many immigrants joined the movement for the western frontier lands, or settled in established urban centers. Irish immigrants not only made enormous contributions to the rapid development and population of North America, but they also brought with them a rich cultural heritage. Immigration and passenger ship lists show some important early immigrants bearing the name Jaret:

Jaret Settlers in United States in the 17th Century