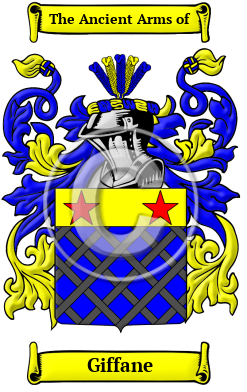 The distinguished surname Giffane emerged among the industrious people of Flanders, which was an important trading partner and political ally of Britain during the Middle Ages. As a result of the frequent commercial intercourse between the Flemish and English nations, many Flemish migrants settled in Britain. In early times, people were known by only a single name. However, as the population grew and people traveled further afield, it became increasingly necessary to assume an additional name to differentiate between bearers of the same personal name. One of the most common classes of surname is the patronymic surname, which was usually derived from the first name of the person's father. Flemish surnames of this type are often characterized by the diminutive suffix -kin, which became very frequent in England during the 14th century. The surname Giffane is derived from Giff, a pet form of the personal name Geoffrey. This pet form is supplemented by the diminutive suffix -on or -in.

Early Origins of the Giffane family

The surname Giffane was first found in North Ayrshire where the Barony of Giffen was in the parish of Beith in the former District of Cunninghame. Giffen Castle is today in ruins but the castle was home to the Lordship of Giffin, which included the Baronies of Giffen, Trearne, Hessilhead, Broadstone, Roughwood and Ramshead dating back to the 15th century. It fell into disrepair soon after 1726 and finally collapsed in 1838.

Early History of the Giffane family

This web page shows only a small excerpt of our Giffane research. Another 124 words (9 lines of text) covering the years 1710, 1837, 1910, 1640 and are included under the topic Early Giffane History in all our PDF Extended History products and printed products wherever possible.

More information is included under the topic Early Giffane Notables in all our PDF Extended History products and printed products wherever possible.

Migration of the Giffane family to Ireland

Some of the Giffane family moved to Ireland, but this topic is not covered in this excerpt.
Another 57 words (4 lines of text) about their life in Ireland is included in all our PDF Extended History products and printed products wherever possible.

Migration of the Giffane family

In the immigration and passenger lists a number of early immigrants bearing the name Giffane were found: Mr. Giffen settled in Boston in 1769; Thomas Giffen settled in Jamaica in 1801; Hannah Giffin settled in Pennsylvania in 1771; followed by John Giffin in 1840. In Newfoundland the surname came to be spelled Whiffen and Wiffin, with many family members established at Bonavista. William Wiffen was registered in Bonavista in 1828.