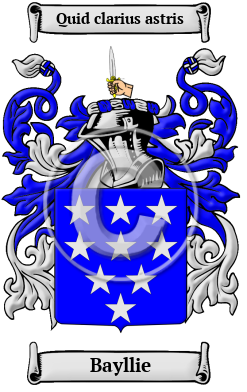 The Irish Bayllie, originally came to England following the Norman Conquest of 1066. The name Bayllie is for a person who held the civil office of the same name in Normandy. The title 'Le Bailli' was approximately equal to that of Viscount or sheriff.

Early Origins of the Bayllie family

The surname Bayllie was first found in County Down (Irish:An Dún) part of the Province of Ulster, in Northern Ireland, formerly known as county St Mirren.

Early History of the Bayllie family

More information is included under the topic Early Bayllie Notables in all our PDF Extended History products and printed products wherever possible.

Migration of the Bayllie family

Some of the first settlers of this family name or some of its variants were: Mary Bailey, who was listed as being in Virginia in the year 1619; Jonas Bailey, who was recorded in Maine in 1634; James Baillou who settled in Georgia in 1733 with his wife and son, Elizabeth, Mathew, Matty, Stewart, William Bailie, who all arrived in Philadelphia in 1804. John, Joseph, Mathew, Robert, Samuel, Thomas, Walter, William Bailey, who arrived in Pennsylvania between 1770 and 1840. Several of the name came to Newfoundland. Among them were Richard Bayly, who settled in Bay de Verde in 1675.