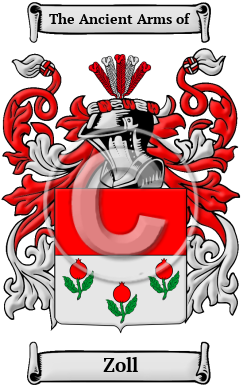 The Zoll family originated in Bavaria, Germany. As hereditary surnames were adopted in that area beginning in the 12th century, people were often identified by the kind of work they did. Zoll is an occupational name for a toll-taker or tax gatherer. The Zoll family became landed aristocrats and they resided in an elegant feudal manor on a vast estate in Bavaria.

Early Origins of the Zoll family

The surname Zoll was first found in Bavaria, where the name was anciently associated with the tribal conflicts of the area. They declared allegiances to many nobles and princes of early history, lending their support in struggles for power and status within the region. They branched into many houses in Austria and Switzerland, and their contributions were sought by many leaders in their quest for power. Chronicles first mention Eberhard Zollner of the town Eger on the border between Bavaria and Bohemia. Chronicles also mention Hartman der Zoller of Emmerdingen in 1392, and Johann Vryenstat der Czoellner of Liegnitz, Silesia in 1388.

Early History of the Zoll family

In the medieval era, many different cultural groups lived in the German states. There are thus many regional variations of German surnames from that era. Westphalians spoke Low German, which is similar to modern Dutch. Many German names carry suffixes that identify where they came from. Others have phrases attached that identify something about the original bearer. Other variations in German names resulted from the fact that medieval scribes worked without the aid of any spelling rules. The spelling variations of the name Zoll include Zoller, Zoll, Zoeller, Zollner, Zolner, Zoll, Zoellner and many more.

More information is included under the topic Early Zoll Notables in all our PDF Extended History products and printed products wherever possible.

Zoll migration to the United States +

Zoll Settlers in United States in the 18th Century

Zoll Settlers in United States in the 19th Century

Historic Events for the Zoll family +