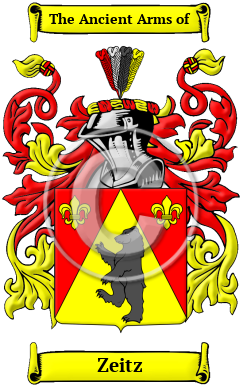 Early Origins of the Zeitz family

The surname Zeitz was first found in Bohemia, where this family name became a prominent contributor to the development of this region from ancient times. Always prominent in social affairs, the name became an integral part of that turbulent region as it emerged to form alliances with other families within the Feudal System and the nation. Chronicles first mention Mitschke Zeitler of Bohemia in 1385, Maczke Czydeler of the Silesian city Liegnitz in 1387, Niclas Czedler of Glatz, Silesia, in 1403, and Pessko Czeydler of Glatz in 1418. In Old-German the name literally referred to the art and science of bee-keeping.

Early History of the Zeitz family

This web page shows only a small excerpt of our Zeitz research. Another 127 words (9 lines of text) covering the years 1617, 1789, 1657, 1706 and 1686 are included under the topic Early Zeitz History in all our PDF Extended History products and printed products wherever possible.

Spelling variations of this family name include: Zeidler, Zeidller, Zeideler, Zeitler (Austria), Zeidlerr and many more.

More information is included under the topic Early Zeitz Notables in all our PDF Extended History products and printed products wherever possible.

In the United States, the name Zeitz is the 13,127th most popular surname with an estimated 2,487 people with that name. [1]

Zeitz migration to the United States +

Zeitz Settlers in United States in the 18th Century

Zeitz Settlers in United States in the 19th Century