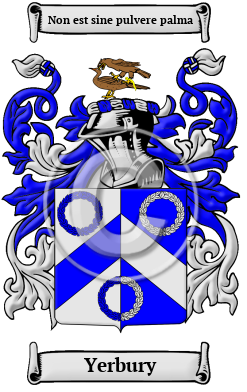 The Anglo-Saxon name Yerbury comes from when the family resided in either the parish or the hamlet called Yarborough in the county of Lincolnshire. The surname Yerbury belongs to the large category of Anglo-Saxon habitation names, which are derived from pre-existing names for towns, villages, parishes, or farmsteads.

Early Origins of the Yerbury family

The surname Yerbury was first found in Lincolnshire at Yarbourgh or Yaburgh, in the hundred of Louth-Eske. The name was listed as Gereburg in the Domesday Book [1] and literally means "the earthwork, or the fortification built of earth" derived from the Old English word "eorth-burgh" [2] "The living [of Yarborough] is a discharged rectory, valued in the king's books at £9. 13. 6.; net income, £226; patron, Nicholas Edmund Yarburgh, Esq., of Heslington Hall, near York, who is lord of the manor, and owner of half the parish." [3]

Early History of the Yerbury family

This web page shows only a small excerpt of our Yerbury research. Another 100 words (7 lines of text) covering the years 106 and 1066 are included under the topic Early Yerbury History in all our PDF Extended History products and printed products wherever possible.

Before English spelling was standardized a few hundred years ago, spelling variations of names were a common occurrence. Elements of Latin, French and other languages became incorporated into English through the Middle Ages, and name spellings changed even among the literate. The variations of the surname Yerbury include Yarburgh, Yarborough, Yearbugh, Yerburgh, Yearby and others.

Another 44 words (3 lines of text) are included under the topic Early Yerbury Notables in all our PDF Extended History products and printed products wherever possible.

Yerbury migration to the United States +

Yerbury Settlers in United States in the 19th Century

Yerbury Settlers in United States in the 20th Century